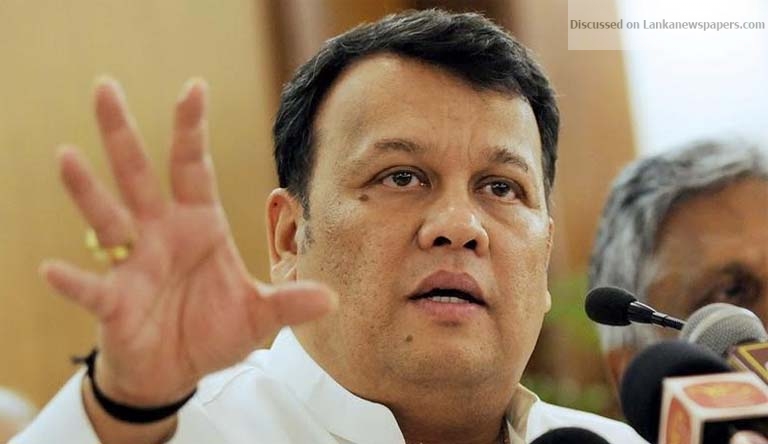 The Sri Lanka Freedom Party (SLFP) yesterday declared that it was yet to decide on its position on the executive presidency though President Maithripala Sirisena had earlier volunteered to divest himself of some of his powers through the 19th Amendment to the Constitution, enacted in April 2015.

SLFP Vice President and spokesman Mahinda Samarasinghe, yesterday, said that the Central Committee of the party was still examining the prospect of abolishing the executive presidency, introducing further amendments or retaining it.

Samarasinghe, who holds ports and shipping ministry portfolios, was addressing the media at SLFP main office, at T. B. Jayah Mawatha. Yesterday’s briefing was his first after receiving the appointment on July 3 in after a section of the 41-member SLFP/UPFA parliamentary group had left the government.

Samarasinghe quoted President Sirisena as having said that the final decision on the executive presidency should be taken by parliament.

Asked by The Island whether the SLFP had quite conveniently forgotten the then common presidential candidate Maithripala Sirisena’s pledge to Ven. Maduluwawe Sobitha to do away with the executive presidency, a smiling Samarasinghe said that was a much repeated promise since the enactment of the 1978 Constitution. Since then, leaders of all major political parties had repeatedly pledged to abolish the executive presidency though they never did it, Samarasinghe said. When The Island inquired whether those leaders had deliberately deceived the electorate, Samarasinghe pointed out that President Sirisena had submitted a Cabinet paper to divest himself of some executive powers.

Samarasinghe said that 19th Amendment contained only some of the recommendations made by President Sirisena and that amendment would never have been a reality at that time as the UNP parliamentary group comprised less than 50 lawmakers. “We had 145 members and except one (former Navy Chief of Staff Rear Admiral Sarath Weerasekera) all voted for the amendment.”

When The Island pointed out that UN Human Rights Chief Zeid Ra’ad Al Hussein had declared on June 28, 2016 Sri Lanka was to have a new Constitution or introduce required amendments by the end of 2016,  Samarasinghe insisted that Sri Lanka was a sovereign state and couldn’t be dictated to by Geneva. Samarasinghe said that President Sirisena wouldn’t succumb to international pressure under any circumstances.

Geneva has quoted Hussein as having said: “A significant momentum has been achieved in the process of constitutional reform. On 10 March 2016, Parliament adopted a resolution establishing a constitutional assembly to draft and approve a new constitution or amendments by the end of 2016, which would then be placed before the people at a referendum in 2017. The drafting process has benefited from an inclusive public consultation process overseen by a Public Representations Committee that received submissions and held district level consultations in the first quarter of 2016.”

The Island also sought an explanation from Samarasinghe as to how the Sirisena-Wickremesinghe government intended to rescind promise given to the Human Rights Council in late 2015 not only to continue with moratorium on judicial executions in place since 1976 but also to do away with the death penalty. Samarasinghe said that Sri Lanka could explain the circumstances under which President Sirisena decided to resume judicial executions.

Samarasinghe said that Sri Lanka could change its stand on death penalty though over the years successive governments had referred to moratorium on death penalty as a plus point in talks with the international community.

Samarasinghe insisted that President Sirisena was ready to sign death warrants once Justice Minister Thalatha Atukorale, Attorney General Jayantha Jayasuriya and other relevant authorities followed the procedure leading to the presidential authorisation. Samarasinghe said so when The Island queried whether President Sirisena was awaiting Justice Minister Atukorale to finalise the process.

Referring to President Sirisena’s declaration at the regular Cabinet meeting two weeks ago that judicial executions would be resumed, Samarasinghe said that he was among those present. None of those at that meeting, including Minister Atukorale, had opposed the move. Instead, almost all members of the Cabinet cheered the decision therefore statements made outside the cabinet contrary to the original decision weren’t acceptable.

Samarasinghe described the decision to resume judicial executions as a collective undertaking taken by the National Unity Government.

The minister stressed that the decision applied to those who had been found to be dealing in heroin after being found guilty by court in respect of heroin offences.

The Island also pointed out that the Human Rights Commission of Sri Lanka (HRCSL) established by the Constitutional Council answerable to parliament, too, was strongly opposed to the resumption of judicial executions. Samarasinghe said that President Sirisena had received letters/statements in support of his decision as well as against. However, the vast majority of people backed the decision.