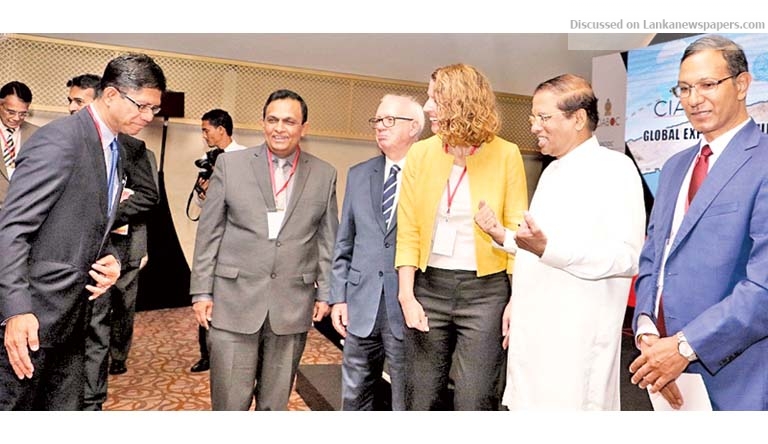 President Maithripala Sirisena yesterday called for the closing of loopholes in global anti-corruption laws and greater international cooperation to expedite action against corruption.

Addressing a forum of anti-corruption experts from around the world in Colombo, President Sirisena said the lack of cooperation from other countries has hampered the Government’s efforts to investigate the corrupt dealings of several Sri Lankans hiding in overseas locations.

Pointing out that there are several shortcomings in international laws and regulations used for anti-corruption drives, the President said: “Several local persons responsible for mega scale fraud and corruption are hiding in other countries. But certain regulations of those countries including immigration and emigration laws, visa rules, residential laws and regulations have become a challenge and a great hindrance to work against them. Our investigation bodies face difficulties when conducting investigations into those suspects as we do not receive the due support of those countries.”

The President was addressing a meeting of the UN Expert Group on Jakarta Principles which began in Colombo as the Chief Guest yesterday morning. Adapted by experts and practitioners at a meeting in Jakarta, Indonesia in 2012, the Jakarta Principles aim to strengthen the effectiveness and independence of anti-corruption authorities around the world.

“As a result of not having proper international assistance, the process of launching investigations into fraud and corruption and apprehending suspects is hampered.”

In this regard, the President highlighted the need for coming to a common platform to act against fraud and corruption with the assistance of other countries.

“However, we will not be daunted by these challenges. Sri Lanka will be elevated to the top ranking among countries fighting corruption,” the President asserted. The President said Sri Lanka is being converted to a corruption free country aiming to achieve the highest place in the Anti-corruption Index. He was determined to achieve this feat during his period in office to drive the country towards prosperity sans bribery and corruption. The President highlighted the steps that will be taken to ensure a corruption free country. Qualified professionals will be recruited to fight corruption. He pointed out the need to work with all national and international stakeholders that work against bribery and corruption to reach a common goal.

The President said as he promised at the 2015 Presidential Election, most of the executive powers vested with the Executive Presidency could be removed with the assistance of Constitutional Council.

“It is a move to strengthen democracy, freedom and fundamental rights and as a whole and a victory for the people of the country. We have strengthened the judiciary while removing political interference. No telephone calls change the freedom of judges now. The Bribery or Corruption Commission has also been empowered through necessary changes in Parliament to fight against misconduct and ensure freedom to work without any political interference,” he explained.

Present and former heads of anti-corruption authorities from over 30 countries and international anti-corruption experts are attending the three day meeting at the Taj Samudra hotel in Colombo.

The new anti-graft legislation being drafted will be in line with the Jakarta Statement on Principles for Anti Corruption Agencies, Bribery Commission Director General Sarath Jayamanne PC said.

He was speaking at the inauguration of the Global Expert Group Meeting (GEGM) on the Jakarta Principles held in Colombo yesterday.

The commission is currently in the process of drafting a new Bribery Act and amending the current Declaration of Assets and Liabilities law.

Speaking in the presence of President Maithripala Sirisena, the DG committed to bring in these imminent reforms to anti-graft legislation in conformity with the Jakarta Principles.

Adopted by experts and practitioners at a meeting in Jakarta, Indonesia in 2012, the Jakarta Principles aim to strengthen the effectiveness and independence of anti-corruption authorities around the world. The GEGM was co-hosted by the Commission to Investigate Allegations of Bribery of Corruption (CIABOC) in Sri Lanka and United Nations Office on Drugs and Crime (UNODC) and United Nations Development Programme (UNDP).