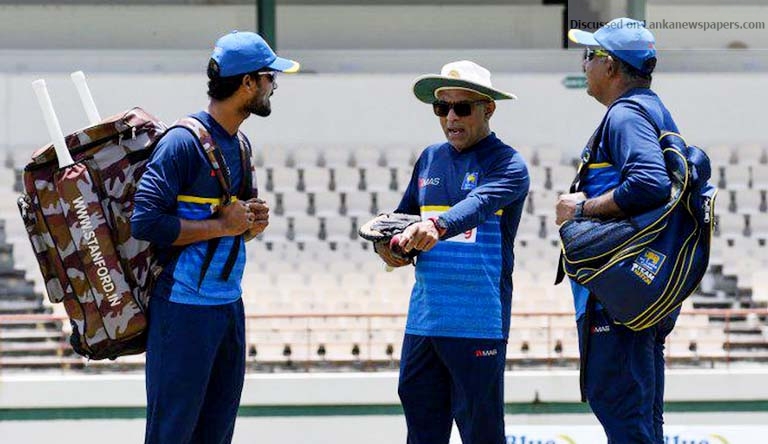 Neither a guilty plead nor Faizer Mustapha’s lawyer friends could save the Sri Lankan trio of captain Dinesh Chandimal, Coach Chandika Hathurusingha and Manager Asanka Gurusinha as the International Cricket Council came down hard on them imposing the maximum possible penalty for their excesses during the second Test Match against the West Indies last month.

Apart from the two Test match ban, that the trio are already serving, they were also handed a suspension of four ODIs after pleading guilty for breaching Level 3 of the ICC Code that relates to conduct that is contrary to the Spirit of the Game.

Sri Lanka’s captain and management were charged by ICC CEO David Richardson for holding up play on day three of the second Test in St. Lucia after Chandimal had been charged for ball tampering. Chandimal was also suspended for the last Test match against West Indies for changing the condition of the ball.

The Independent Judicial Commissioner Michael Beloff (QC) announced the sanctions on the trio yesterday and they will be out of the first four ODIs against South Africa apart from missing out the two Test series.

Beloff had conducted the hearing last Wednesday over videoconference. The hearing lasted for more than six hours and the sanctions were announced yesterday.

The Sri Lankans were hopeful that by pleading guilty they would receive the minimum sanction which is a ban from the two match Test series. The Sri Lankan lawyers’ submissions haven’t been given a favourable hearing as Beloff had decided to hand the maximum sanction possible.

Apart from the sanctions, the trio were also handed six demerit points each. These were added to their disciplinary records and Chandimal is in serious danger as the demerit points he has accumulated has gone up to ten due to a previous breach of the Code of Conduct.

If the Sri Lankan captain reaches 12 or more demerit points within the next 24 months, he will be suspended from either three Tests or six ODIs. All what it requires Chandimal to get into trouble again is a slow over rate offence, something the Sri Lankans have been found fault with frequently in recent times.

The suspension means that Chandimal can neither be nominated as a substitute fielder nor can he enter any part of the playing area during the games although he is allowed to stay in the dressing room.

Hathurusingha and Gurusinha are barred from entering the dressing room.