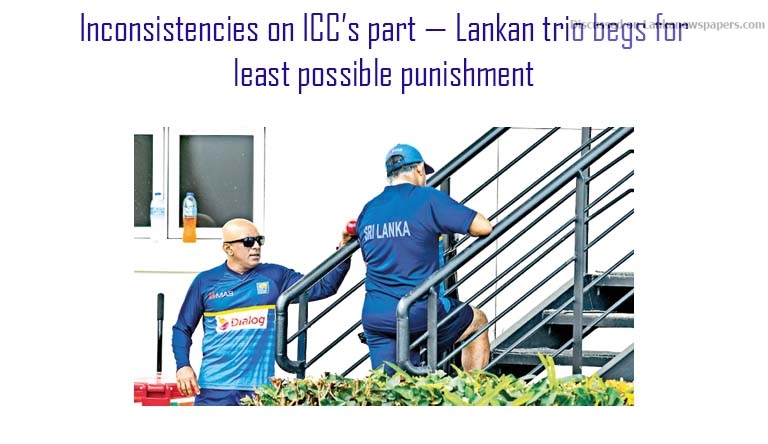 The trio pleaded guilty for a level 3 spirit of cricket offence after play was stopped for two hours during the third day of the drawn Test, but they have maintained the little clarity offered to them by the match officials contributed to the prolong delay in the resumption of day three’s proceedings.

“Miscommunications and confusion occasioned by the lack of clarity caused by the match officials conduct contributed (at least in part) to the delay caused,” Sri Lanka skipper wrote in his submissions to the ICC. This was the same opinion expressed by the coach and the manager in their submissions.​

ICC concluded its hearing on Wednesday–just hours before the start of the opening Test against South Africa and had insisted trio’s withdrawal from the current series pending ICC’s verdict. According to sources, the ICC were to announce their decision on the same day but lawyers representing the Sri Lankans had insisted for a detail report with reasons. Accordingly the Judicial Commission had asked for more time but had requested their withdrawal from the current series.

According to the submissions made by the captain, coach and the manager during Wednesday ‘s hearing, they have explained the reasons for the delays. While apologising profusely for their part they have begged for the least possible punishment. A level 3 offence carries a minimum of four demerit points, equalled to two Test matches and a fine.

According to the submissions, the match referee Javagal Srinath had informed them that the ICC match officials had video evidence of Chandimal changing the conditions of the match during the second day’s play and an inquiry will be held later.

In the meantime, they have decided to change the ball and also to add five penalty runs to the opposing team. This was contested by the Sri Lankans who insisted an inquiry be held prior to the start of the day’s proceedings.

“Myself, Mr. Hathurusingha and Mr. Gurusinha contested this position, and Mr. Gurusinha informed Mr. Srinath that if an inquiry would be held later in the day it is unfair to change the ball and award five penalty runs to the other team at that point of time without an inquiry. I further state that we insisted on the holding of an inquiry,” Chandimal who earlier lost his ball tampering appeal had said.  He was given a one match ban and a fined 100 percent of his match fee for tampering with the ball, a charge he has rejected forthright.

After discussions, the match referees had stepped out of players dressing room and on his return he has given an undertaking only to change the ball and not award five penalty runs to the opposing team.

“On the strength of that undertaking the Sri Lankan team took the field at around 10.55am,” he wrote.

However when the team was in the field the umpires not only had changed the ball but communicated to the team that five penalty runs would be added to the West Indies total. This led to another protest by the Sri Lankan players and another 40 minute delay ensued.

“When the team was in the field the umpires informed the team that the ball will be changed and five penalty runs would be awarded to the West Indies. This was done without an inquiry or without producing any evidence,” he added.

“Due to the aforesaid inconsistent statements by the match officials another delay ensued,” Chandimal said.

Therefore, they have asked for the least possible punishment considering the circumstance which led to the unavoidable delay in the match. Chandaka Jayasundere PC with Mehren Careem and Pulasthi Ranasinghe appeared for Chandimal while Kalinga Indatissa PC with Charaka Jayaratne and Mahesh Senaratne appeared for Hathurusingha and Gurusingha.