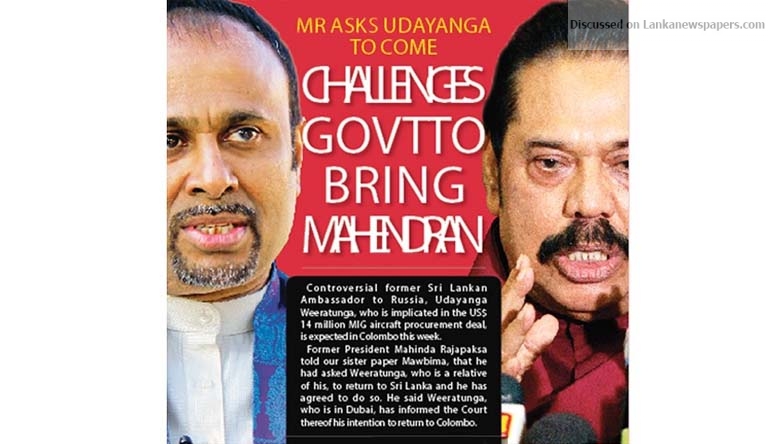 Weeratunga is due to appear before the Fort Magistrate on the coming Friday and is now expected to keep this date. His lawyers are expected to file a motion in Court today informing the Magistrate that he will appear this Friday.
The former President also said, “now that we have got Udayanga back, it is up to the Government to bring former Central Bank Governor Arjuna Mahendran here from Singapore. We have given the Government a challenge,” he said.
Weeratunga is the main suspect in the alleged fraud in the purchase of seven MIG 27 attack aircraft for the Sri Lanka Air Force and Mahendran has been implicated for his alleged role in the Bonds Scam.
Last year the Courts froze 16 banks accounts of Weeratunga due to allegations of fraud in the purchase of the MIG fighters.The case is ongoing without him. In March, the Fort Magistrate issued a warrant for his arrest. Police in Sri Lanka applied for an Interpol warrant to have him arrested as he is overseas but were unable to get the order. Eventually, Sri Lanka applied to the Government of Dubai to have him detained in that country.
Courts have been informed that Investigations revealed that funds amounting to a total of US$1.5 million had been deposited at various times to the sixteen accounts belonging to him. Meanwhile, the Sri Lankan Air Force, which is the client for the aircraft, is claiming that it is unable to locate the original purchase contract, which is said to have been signed in the presence of Weeratunga.
Mahendran is in Singapore and officials have said efforts are being made to have him sent to Colombo. Mahendran’s son-in-law Arjun Aloysius and a senior executive of his company Perpetual Treasuries Kasun Palisena are currently in remand custody.
These sources also said that the arrival of Weeratunga had been made possible due to not only requests by Rajapaksa but also due to the pressures which have been exerted by a new organization named “ Victims of Good Governance.”
The Victims of Good Governance  has already over 8,500 members. Its Chairman is Sirisena Amarasekera, Secretary to late Prime Minister Ratnasiri Wickremanayake and the Secretary is former Governor of the Central Bank of Sri Lanka Ajit Nivard Cabraal.
The membership comprises members of the Armed Forces, senior and junior public servants, businessmen, lawyers and other stakeholders.
The lawyers within the group, will appear for Weeratunga when he appears before Court, sources said.
The NGO Victims of Good Governance will also provide security for Weeratunga when he arrives in Colombo, the sources said.
Former Prime Ministerial Secretary  Sirisena Amarasekera told Ceylon Today last afternoon that the organization, which was  formed two days ago will decide what course of action it will take in due course.