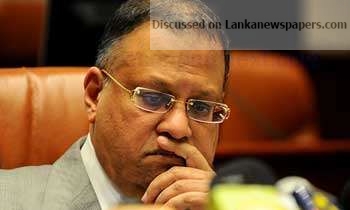 The CID informed Court today that legal preparations are underway in relation with the extradition of former CBSL governor Arjuna Mahendran in the event if he is located in any country in which the current red notice of Interpol is applicable.

Fort Magistrate Lanka Jayaratne also allowed the prosecution to get a comprehensive copy of the extractions of the current magisterial inquiry (a copy of the case file) so as to prepare the legal requirement in relation with the possible extradition of Mahendran.

Recently the Interpol issued a Red Notice for the search and arrest of former Central Bank Governor Arjuna Mahendran.

At the onset of the inquiry, the prosecution wanted to know whether there was any representation on behalf of the third suspect, Perpetual Treasuries Ltd as per the requirement of the law.

Previously, the Magistrate directed to issue notices on Perpetual Treasuries Ltd to send a representative to face the inquiry on its behalf as the company it self is the third suspect into the inquiry.

However, President’s Counsel Kalinga Indatissa who appeared for the suspects informed that second suspect Arjun Aloysius is prepared to represent the third suspect (PTL).

The court on an earlier occasion held that there could be a possible conflict of interest if the fourth suspect Kasun Palisena represents on behalf of the company (PTL).

Considering the previous order the prosecution questioned how the conflict of interest could be avoided when Aloysius represents the Company and more over they questioned also about the interest that Aloysius actually has so as to represent the PTL.

PC Indatissa said according to the section 261 of the Criminal Procedure Code, the legal requirement is actually to produce anyone who is responsible to represent on behalf of the company. He said that Aloysius is the one who holds the shares of Perpetual Capital Holding which is the holding company of PTL.

At this point Magistrate asked whether Aloysius has any shares of PTL by his name. The answer of the PC was negative.

However, PC Indatissa sought the court permission to tender further legal submission in this regard which is subsequently allowed by the court.

Meanwhile, the prosecution also wanted to know the stance of the defense with regard to the previous court orders that directed the PTL and the two suspects (Aloysius and Palisena) to provide a comprehensive list of their assets in a form of a report to the prosecution (the court said previously that the report is not regarded as a declaration which can be used as evidence in the inquiry).

However, PC Indatissa informed court that neither PTL nor Suspects are ready to provide such reports on their assets as it is not required by law. Citing legal precedents he said that Court can’t ask from the defense to provide something which may be used against the suspects during the inquiry by the prosecution.

Considering the PC’s request the court allowed him to file further written submission on this regard so as to make an appropriate order afterwards.

In the meantime, the Perpetual Treasuries Ltd owner Arjun Aloysius and its CEO Kasun Palisena were ordered to be re-remanded till May 10 by the court over the magisterial inquiry in which they were accused of abetting and conspiring with Arjuna Mahendran to misappropriate public funds worth Rs. 688 million during the Bond auction held on February 27, 2015.