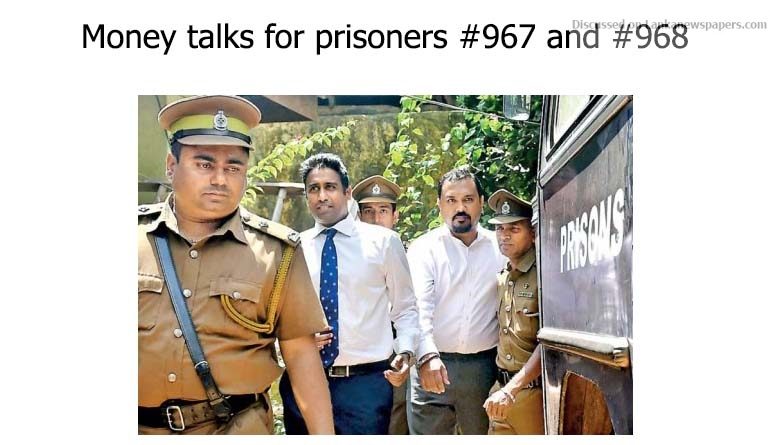 They were accused of being involved in a major Treasury bond scam but putting them behind bars did not stop them from using the money they had to bribe officers at the Welikada prison to obtain the best facilities for a short while.

Perpetual Treasuries head Arjun Aloysius and Chief Executive Officer Kasun Palisena have been in remand prison after being arrested over the treasury bond scam.

Sources revealed that the two accused received special facilities in the prison since they had allegedly spent a large sum of money to get special attention from some corrupt prison officers.

According to sources at the Ministry of Prison Reforms, Rehabilitation, Resettlement and Hindu Religious Affairs, high-ranking prison officials and a prison doctor had an understanding with the accused to get special treatment, for a fee.

Sources said that large sums of money were believed to have changed hands for the special treatment.

Accordingly, Arjun Aloysius had been examined on February 7 and it was recommended that he be provided with a mattress and pillows saying he was suffering from severe back pain.

A special area had been set up for them following the doctor’s recommendation. In addition, a former top Police officer arrested in relation to the murder of journalist Lasantha Wickrematunge, and a top businessman were also in the same section.

According to sources, the prison doctor who examined Aloysius and Kasun Palisena, had been provided with telephone facilities to communicate with Aloysius and Palisena.

The prison official’s room has allegedly been used by top politicians, VIPs and underworld leaders whenever they were sentenced, to meet visitors and hold meetings.

On February 21, doctors at the Welikada Prison had been met by the two accused who sought admission to the Prison Hospital.

Arjun Aloysius was suffering from headache, vomiting, anorexia, and a urinary infection while Kasun Palisena had back pain and a difficulty in his right leg at that time.

The doctors prescribed them some medicine on the day and recommended that they be admitted to the Prison Hospital the following day. A prison doctor, during his hours of service, can recommend that a detainee be hospitalised.

When their hospital admission was recommended, Arjun Aloysius and Kasun Palisena had made a request to the then doctor at the OPD that they be admitted to a ward where VIPs are admitted. However, the doctor had recommended to admitting them to a normal ward. The accused were not happy since the facilities at the normal ward were not to the standard that they were expecting.

Once they were granted their request, Arjun Aloysius and Kasun Palisena were allegedly given special treatment in the hospital.

The agreement was that Arjun and Kasun would be kept in Ward No. 3 with special treatment until they were released on bail. But discord between the accused and a doctor compelled the latter to send back the accused to the prison by recommending that their health was sound.

Thereafter, Arjun Aloysius had been transferred to Ward G of the prison on March 4.

Similar incidents of prison officials being bribed had come to light even earlier. The Sunday Leader reported last week how former Parliamentarian Duminda Silva, who has been convicted for murder, had also received special treatment in prison.

Minister of Prison Reforms and Rehabilitation, D. M. Swaminathan had said that he would investigate the allegations.