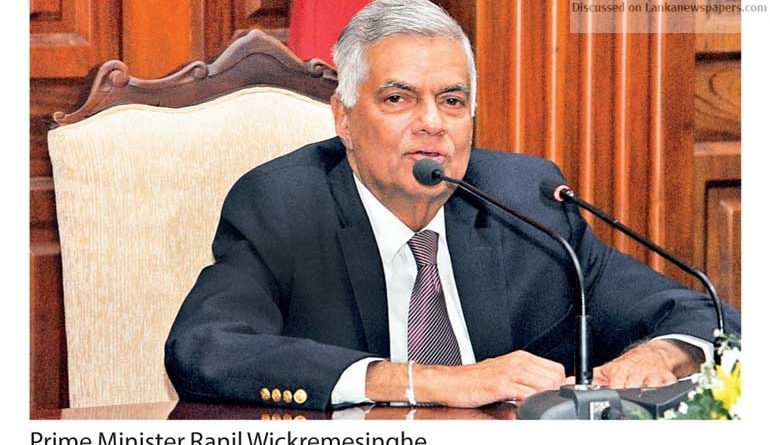 The no-confidence motion against Prime Minister Ranil Wickremesinghe, for his alleged involvement in treasury bond scams and failure to act promptly to contain ethnic violence in Ampara and Kandy, was defeated in Parliament yesterday with a majority of 46 votes.

At the end of a full day debate from 10 am to 9.30 pm Speaker Karu Jayasuriya moved the House for a vote.

The motion against Prime Minister Wickremesinghe received 76 votes in favour and 122 votes against while 26 MPs were absent at the division taken by name. Secretary General of Parliament Dhammika Dassanayake read out the names of 224 MPs (Speaker Jayasuriya not included), and each of them present was asked to state ‘Yes’ or ‘No’. Voting started at 9.30 pm and ended around 10 pm.

The six members of the JVP voted in favour of the motion along with the Joint Opposition MPs.

Former President Mahinda Rajapaksa and his son Namal voted for the motion. The former President did not enter the main chamber of Parliament during the entire debate.

SLFP Ministers who voted against Prime Minister Wickremesinghe told a press conference yesterday evening that the head of the government was President Sirisena and, therefor they would remain in the government. “It is the President who would decide whether we should hold ministerial posts or not. Not the UNP,” Minister SB Dissanayake told the media at the Parliament complex, while the debate on the motion was in progress.

Opposition Leader R Sampanthan, participating in the debate, on the motion said: “With regard to the Central Bank bond scam, consequent to investigations two persons are in custody and a warrant has been issued against a third person and investigations are in progress. The investigations should be completed as soon as possible and the rule of law should be implemented irrespective of who they are.

“With regard to the timing of the motion, this bond scam occurred three years ago and it has been the subject of public focus for a long time and why has this motion brought against the PM only now?

This is a plan to bring down, totally and completely, the present government.”

Chief Opposition Whip JVP leader Anura Kumara Dissanayake: “This is a politically motivated no-confidence motion. Our position on this motion’s vote is being questioned by many. Some even made phone calls and asked whether our vote for the motion against Prime Minister would not make us complicit in the crime of strengthening the Rajapaksa camp. Some others demanded to know from us if we voted against the motion whether that wouldn’t amount to approving and take Prime Minister’s camp wouldn’t it amount to approve the bond scams he and his government worthies committed. We took a decision to vote for the motion against the prime minister. We took that decision after considering the current political situation and its dynamics. On the other hand, this motion is against corruption and racism. The JVP is always against corruption and abhors racism. Viewed from that perspective, too, we have made the right decision.

“The whole world knows that those who accuse the Prime Minister of bond scam, committed similar frauds. Those who say that they have no-confidence in him because of his failure to prevent the spread of racial riots in Kandy district are champions of racism. A simple glance at the list of the names of those who signed the no-faith motion would show you the worst racists. They are more racist than the Prime Minister.

“We hold not only the Prime Minister but also the President responsible for the accusations listed in the no confidence motion.

“The motion would have been complete if it had contained a line stating that there was no confidence in the Premier for his deliberate delaying of the investigations against the Rajapaksas.

Leader of the House Minister Lakshman Kiriella, participating in the debate, said that the no-confidence motion against the PM had, as its basis, baseless allegations.

He said that the premier was not responsible for any of the allegations mentioned in the motion.

“Every time Wickremesinghe became the PM, he always appointed an opposition MP as the chairperson of the Committee on Public Enterprises. In 2002, he appointed late minister Jeyaraj Fernandopulle as the COPE Chairman. This time, he gave that post to the JVP. He also created parliamentary Oversight Committees and gave chairperson posts to both the government and opposition MPs. It was because he thought that there was nothing to hide. Former Presidents Mahinda Rajapaksa and Chandrika Kumaratunga never did that.”

Minister Kiriella said that both the COPE Report and Bond Commission Report had not mentioned the PM was responsible for the Treasury bond scam. Therefore, the motion was invalid, he said.

Gunawardena said that due to the appointment of appointing Arjun Mahendran as the Central Bank Governor, public faith in the country’s foremost financial institution had been eroded. He said it was a conflict of interest to appoint Mahendran who had close ties with Perpetual Treasuries. “Those responsible cannot absolve themselves of their responsibility. Because of this incident, the Finance Minister had to resign from his post. Those responsible cannot be considered innocent.”

Gunawardena said that though Mahendran was wanted by the Sri Lankan courts government ministers met him in Singapore.

The motion was submitted to the Speaker by the Joint Opposition on March 21 carrying the signatures of 55 MPs including four SLFP members in the government ranks. The defeat of the motion ended a 14-day-long numbers game.