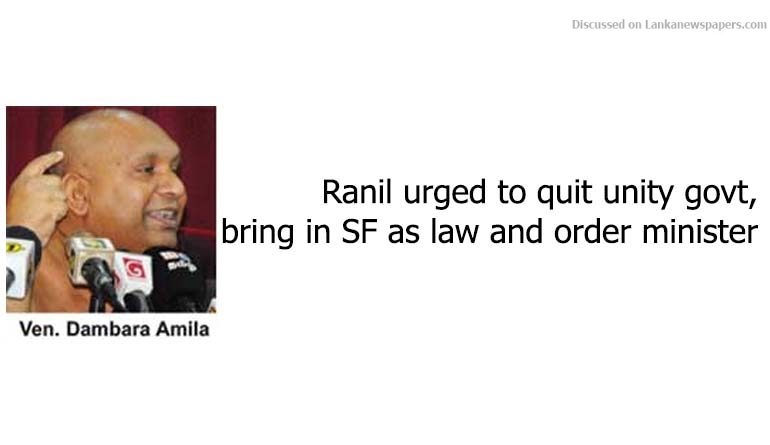 An overtly anti-Joint Opposition  civil society grouping that campaigned for 2015 change of government yesterday said that the National Unity Government would certainly cease to exist tomorrow (April 4) regardless of the outcome of the No- Confidence Motion (NCM) against UNP leader and Prime Minister Ranil Wickremesinghe.

Addressing the media at the Center for Society and Religion (CSR), Maradana, on the invitation of Purawesi Balaya, Ven. Dambara Amila said that the UNP had two options. If the SLFP factions led by President Maithripala Sirisena and former President Mahinda Rajapaksa succeeded in their endeavour, the UNP should immediately quit the government to pave the way for Sirisena to set up his own administration.

Ven. Amila warned the UNP of dire consequences if a section of the party had accepted portfolios in an SLFP-led government. That would be as tragic as allowing the return of ‘dictatorial’ former President Rajapaksa, the thera said, urging senior UNPers not to accept premiership at the expense of Wickremesinghe under any circumstances.

Asserting that the UNP was capable of defeating the NCM, thera said that immediately after the vote the UNP should form its own government. Ven. Amila urged Wickremesinghe to reduce the number of ministers to 30 in accordance with the 19th Amendment to the Constitution and then go all out against the Rajapaksas and their associates.

The thera said the defeat of the NCM would cause turmoil in the JO and the SLFP. President Sirisena should be told in no uncertain terms that he should allow the UNP to fulfil 2015 mandates. The Thera stressed that the UNP should appoint a person capable of meeting the challenging task of law and order portfolios.

Asked whether he had anyone particular name in mind, the thera asserted that Field Marshal Sarath Fonseka would be ideal for the post. Ven Amila recollected how he pushed for former Army Chief’s appointment as law and order minister in the run-up to the minor Cabinet reshuffle in the wake of Feb. 10 debacle at the local government polls.

Purawesi Balaya representatives Ven Amila, Viyangoda, Ratnapriya and Wickremabahu Karunaratne urged the UNP parliamentary group and those who had been elected and appointed on the UNP ticket to stand by its leader. President Sirisena had absolutely no right to seek Wickremesinghe’s removal, they said.

Ven. Amila pointed out that President Sirisena had no moral right to seek Wickremesinghe’s ouster on the basis of poor UNP performance at local government polls. Sirisena’s SLFP managed just 4 per cent of the vote and with its partners about 14 per cent, Ven. Thera noted. How could Sirisena ask for Wickremesinghe’s explanation against the backdrop of the UNP securing nearly 33 per cent of the total polled? He asked.