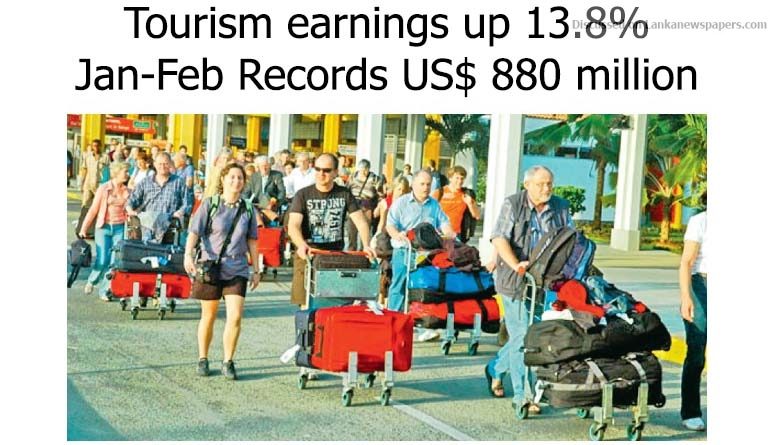 According to data released by the Central Bank, tourist earnings in February this year increased 19 per cent to US$ 436.96 million from US$ 366.3 million a year ago, while earnings for January surged 8.9 per cent to US$ 443 million from US$ 406.8 million. The Government hopes to welcome more than 2.5 million visitors to the country this year, despite missing the same target during the last two years. Last year, the ambitious target was missed by more than 380,000 visitors and 80,000 visitors for the revised target. Minister of Tourism and Christian Affairs John Amaratunga blamed the Sri Lanka Tourism Promotion Bureau for the failure to achieve set targets stating that the promotional arm of the Tourism Ministry was neglecting their duty of carrying out the planned ‘Mega Tourism Promotional Campaign’.

Tourist arrivals during the first two months of this year surged 13.8 per cent to 474,542 visitors from 416,877 tourist recorded during the same period last year.
In February the country welcomed 235,618 tourists, up 19.3 per cent from and according to revised Sri Lanka Tourism Development Authority figures in January this year, Sri Lanka welcomed 238,924 visitors, up 8.9 per cent compared to the corresponding  month last year.

The racial unrest during last month is expected to hamper arrival and tourist earnings figures for March this year and the Sri Lanka Tourism Promotion Bureau to counter the potential slide is planning to launch a advertising campaign with CNN this month, which will be followed by a six-month ‘Digital Marketing Campaign’ and a three-year comprehensive ‘Destination Promotion Programme’.