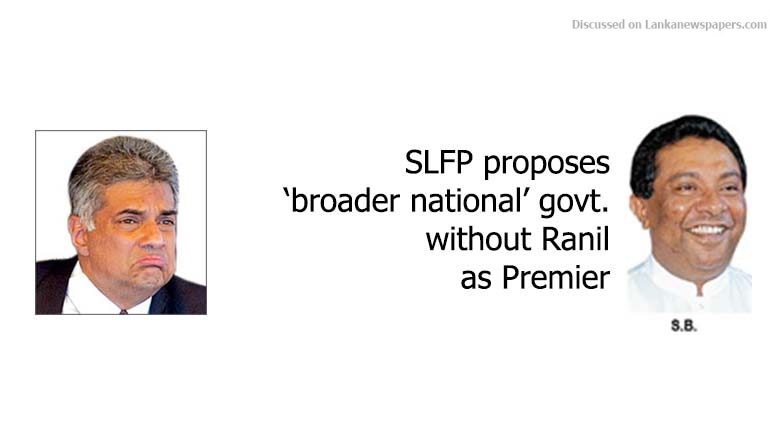 Addressing a packed SLFP auditorium at T. B. Jayah Mawatha, Social Empowerment, Welfare and Kandyan Heritage Minister S. B. Dissanayake said the no-confidence motion (NCM) moved by the Joint Opposition (JO) against PM Wickremesinghe would give Parliament an opportunity to replace the PM.

The NCM handed over to Speaker Karu Jayasuriya on March 23 holds the PM Wickremesinghe responsible for Treasury bond scams in 2015 and 2016.

Having complained to the Commission to Investigate Allegations of Bribery or Corruption (CIABOC) against treasury bond scams and then supported investigations undertaken by the Committee on Public Enterprises (CoPE) into the fraud, the SLFP couldn’t refrain from voting for the NCM, Dissanayake said.

The SLFP Treasurer declared that the NCM was aimed at an individual and certainly not the President and the government.

The Island sought an explanation as to the culpability on the part of the top SLFP leadership in the far bigger second treasury bond scam.

Dissanayake said that as the main coalition partner, the UNP had enjoyed overriding power and couldn’t be reined in. Dissanayaka admitted that the SLFP lacked the strength to take remedial measures. The National List MP said so when The Island pointed out that President Sirisena had saved those responsible for 2015 bond scam by preventing the presentation of the COPE report on the CB heist by dissolving Parliament, then re-appointing Ravi Karunanayake as the finance minister in the run-up to 2016 scam. The Presidential Commission was set up in January 2016.

Dissanayake said that the SLFP understood that far reaching changes were expected by the people and major political parties.