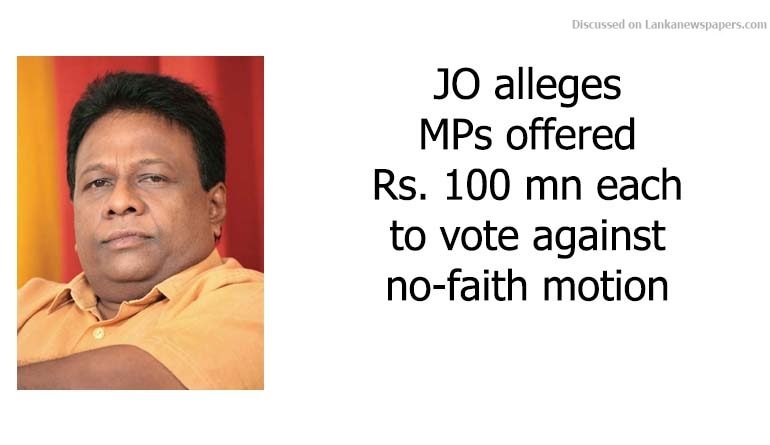 Members of parliament have been offered as much as Rs. 100 mn each to oppose the no-confidence motion (NCM) moved against Prime Minister and UNP leader Ranil Wickremesinghe, Joint Opposition (JO) heavyweight MP Dallas Alahapperuma alleges.

Matara District MP Alahapperuma said so at a public meeting at Verona, organized by the Sri Lanka Pojujana Peramuna (SLPP) in Italy over the last weekend.

Parliament is scheduled to debate and vote on NCM on April 4. The JO handed over NCM signed by 55 members, including four of President Maithripala Sirisena’s group to Speaker Karu Jayasuriya on March 21.

Declaring that a section of the UNP MPs would certainly vote for the NCM, Alahapperuma said that those who had realised that they would never be able to contest a general election successfully were likely to accept the bribe.

The JO Chief Organiser said that whatever the outcome of the NCM, the Sirisena-Wickremesinghe coalition would certainly lose its two-thirds majority in Parliament. The government group consists of 107 (106 UNP + 1 SLMC) and 44 SLFPers.

Four SLFPers have signed the NCM.

Secretary General of Parliament W. B. D. Dassanayake said that a simple majority out of those present in parliament at the time of the voting was sufficient to adopt a NCM.

Dassanayake said so when The Island asked him whether 113 votes were required to pass NCM against PM Wickremesinghe. Parliament comprises 225 members. The official explained had there been only 20 members at the time the vote was taken, simple majority meant 11.

Former State Minister Prof. Rajiva Wijesinha yesterday said that parliament as well as the Commission to Investigate Allegations of Bribery or Corruption (CIABOC) should be seriously concerned about the possibility in an attempt to bribe members of parliament.

Prof. Wijesinha said that he had made two complaints to the CIABOC about attempts to bribe members of parliament. The CIABOC had questioned him on both allegations and he had named all those involved, he added.

In response to our query, Prof. Wijesinha has sent us the following statement: “The first was in 2015 when I reported that a top UNPer (name withheld), on Christmas Day 2014, told me and my sister that he had to go to see the leader of a minority party (name withheld) who was demanding money to support Maithripala Sirisena for the presidency. The second was when I reported that Nahil Wijesuriya had told me that, when he supported the UNP in 2001 at a senior UNPer’s request, the Rs 60 million he gave, in the form of two cheques into the hands of the top UNPer, was used to bribe MPs to cross over to bring down Chandrika Bandaranaike Kumaratunga’s government.

“Bribing MPs is nothing new, the father of a top UNPer (names withheld) would describe how he had bribed MPs in 1964 to bring down Mrs Bandaranaike´s government. I do not think this is confined to one side or the other, but given the massive resources the UNP has at its disposal now after the bond scam, they have more money though less political support.

The commission questioned me on both allegations and also questioned Nahil Wijesuriya regarding the second, though not the witnesses in front of whom he spoke.”

Prof. Wijesinha said that Parliament couldn’t ignore allegations against its members in respect of financial fraud. The academic said that the CIABOC should take tangible measures to inquire into accusations against members without further delay.