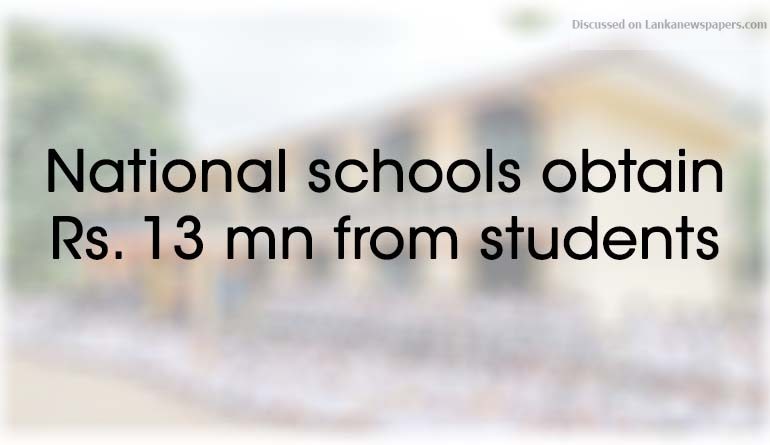 In 2016, 52 national schools had extracted Rs. 13 million from their students for various maintenance and school events after an Education Ministry circular legitimised such practices, teacher unions alleged yesterday.

Secretary of the Ceylon Teachers; Union (CTU) Joseph Stalin said the 2016 Auditor General’s report on the Ministry of Education revealed that the 52 national schools had recruited 307 non academic staff members and paid their salaries using funds collected from students.

“These individuals have been paid Rs. 5.8 million rupees from funds available in the school development fund, sports fund or other such funds. This is a payment that is completely paid by students.”

During the same period those 52 schools spent Rs 7.279 million to book private auditoriums to hold school functions though they had adequate facilities.

Stalin said the schools were permitted to collect money from students through the circular 5/2015 issued by the Education Ministry and that circular needed to be repealed.

“The current minister of education once said that he would stop schools from collecting exorbitant amounts of money from students. But his actions have only legitimized such actions,” he said.

Commenting on the allegation that the circular legitimised money collection by schools media spokesperson for the Ministry, Kalpa Gunarathne said that the Ministry Secretary, Sunil Hettiarachchi should be contacted on that matter. Repeated attempts to contact Hettiarachchi were in vain.