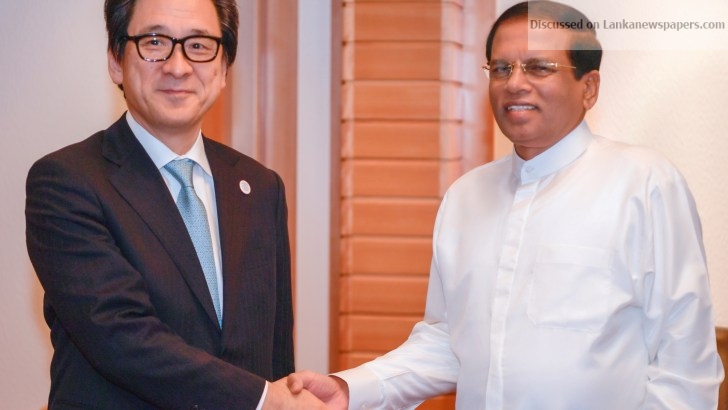 An Investment Forum was held at the Imperial Hotel in Tokyo, today (13) under the patronage of President Maithripala Sirisena to take Sri Lanka- Japan  partnership to new heights as well as to bring more Japanese investments.

Investors and entrepreneurs from both countries attended this Investment Forum and attention was drawn regarding further strengthening the economic ties between the two countries.

Addressing the investors the Minister of Development Strategies and International Trade Malik Samarawickrama said that for  many decades, Sri Lanka is working closely with Japan in various fields and hope this tour of President Sirisena will pave the way to further consolidate those ties between the two countries.

The Chairman apprised regarding the trade and investment services of JETRO in Sri Lanka to the President and said that they expect to further expand those activities in the country.

The president of the Japan International Cooperation Agency (JICA) Mr. Shinichi Kitaoka also met with President Sirisena. During this meeting it was discussed in detail regarding the functioning and the progress of the development projects being carried out in Sri Lankan with the assistance of the  JICA.

Expressing his views in regard of this the President said that the policy of his government is to give a prominent place for the local industries while obtaining foreign assistance. The President requested the President of JICA to assist in projects which can inspire the people as a country to  stand on their own feet. He also said that What is more important to Sri Lanka today is the Small and Medium Scale Development Projects which could uplift the economic standards of the masses.

During this meeting the President of the  JICA pledged to provide assistance in developing the tourism field of the country.