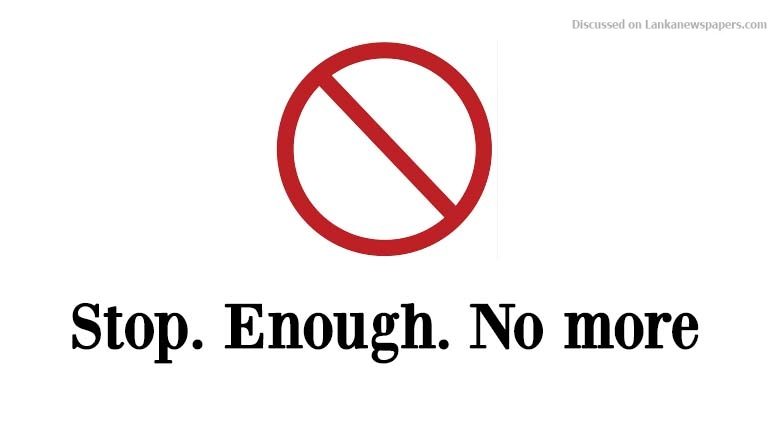 Friday Forum is appalled by the continued violence that has been witnessed in many parts of the country, and especially in the Kandy district, in the last few days. We express our solidarity with the families of the victims who lost their lives in this senseless carnage and with those who have suffered property damage. We unreservedly condemn the attacks on private property and mosques. We also express our solidarity with the Muslim community which maybe fearful of further attacks of hate crimes and deplore the impunity with which perpetrators have been able to carry out attacks.

We condemn the recent violence as abominable and totally unacceptable. Generations of Sri Lankans experienced the carnage of the thirty year civil war, the unspeakable suffering and the damage to the national psyche by conflict among communities. The end of the war brought some hope that we would learn from our troubled history and avoid repeating the mistakes of the past but it seems that this is not to be. The current violence perpetrated by religious extremists purporting to save the majority community from imagined threats from a minority would be absurd if it were not so tragic.

We express our concerns at the slow response of the state to both stopping the violence and dealing with the provocative canards that have been spread among the public. We refer in particular to the rumour that medicines have been introduced into food to make people sterile, which triggered the violence in Ampara. We are also concerned that the violence in the Kandy district was not dealt with as expeditiously as it could have been, increasing the loss of lives and property. We deplore the violence associated with a traffic incident that resulted in a senseless death.  However, it is intolerable this should be used by religious extremists to unleash communal violence resulting in further death and destruction.  We reiterate that it is the duty of the state to ensure that law and order must be maintained in these difficult situations, and that mob violence does not prevail. However, the imposition of emergency rule must be a last resort only when it is acknowledged that a situation has escalated beyond control by all other means. Given the well-documented history of serious abuse of Emergency Regulations by past governments, we call on the President and government to take every effort to avoid prolonging the current state of emergency.

It is the duty of all Sri Lankans to strive for a just, peaceful and inclusive country for ourselves and for future generations. We must not bequeath to the next generation a country torn apart by communal hatred and suspicion. We call on those in authority to take immediate and effective action to prevent the violence from escalating further; to ensure that the perpetrators are held accountable under the law; and to deal with the lurking danger of religious extremists and racist groups who appear to be well organised and ready to act at a moment’s notice. We urge all Sri Lankans to take a clear stand against any form of racism and communalism, support and hold the state accountable for ending violence and promoting ethnic harmony in our country.

S. C. C. Elankovan, Prof. SavitriGoonesekere and Prof. Camena Guneratne For and on behalf of