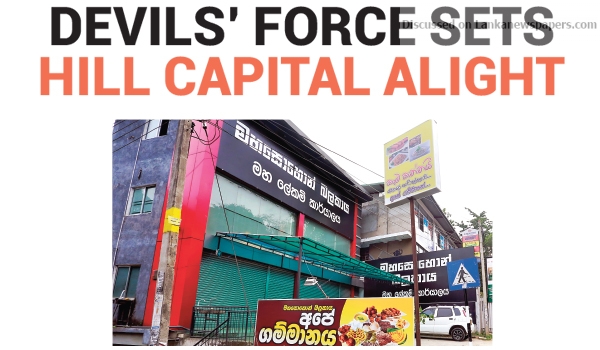 The silent tears fall on smouldering embers but it cannot douse the flames of hatred which engulfed the hill station town of Digana that witnessed a bloody cycle of ethnic violence where the minority Muslims was targeted at the beginning of this week. It all began with hate speech and provoking statements on the so-called social media following the death of a trucker and another individual both belonging to the majority Sinhalese community.

The trucker died almost 9 days after he was allegedly assaulted over a road rage incident, by a group of Muslim men under the influence of liquor, while the other person died after a grenade he was carrying in his possession accidentally exploded.
These two incidents provided the perfect ammo for extremists in the area to unleash mayhem in the area taking the police and other law enforcement agencies by total surprise and within 24 hours the once peaceful town of Digana and the suburbs was burning out of control.

The marauding mobs were well organized and their targets had been previously identified.
Some 75 shops and households belong to Muslims were either damaged or put to the torch and two mosques were vandalized as well as the violence was allowed to go unchecked until the authorities declared a state of emergency and the Kandy region was placed under a dusk to dawn police curfew.

As tension among the two communities ran high, thousands of heavily armed soldiers and personnel from the tri forces were deployed throughout the area along with riot control police.
The area resembled a battle ground as armoured cars and other military vehicles thundered along the narrow village streets in a show of force and to discourage and further violence as jittery residents put up shutters and opted to remain indoors.
The dusk to dawn curfew seemed to have worked and the violence was contained but the tension remained high as preparation were been made to bury the individual who was killed in the grenade explosion.

Devils’ Force
However, at the end of the day the funeral was completed in this tiny village of Pujapitiya in Ambatenne amidst a massive police and military presence without any incident.
As investigations into the violence began, a man identified as one Amith Weerasinghe, a resident of Naththaranpotha in Kengalle was allegedly behind the mayhem.

Weerasinghe presides over an extremist group known as Mahasohon Balakaya or Devils’ Force operating from a plush office in Kengalle that is in the neighbourhood of Digana and is known to have a following throughout the country.
This group, investigators say started hate messages and other texts on social media with false claims that a Buddhist temple had been attacked by Muslims and screamed for revenge. The fake news also claimed that a Buddhist priest had also been slain.
In the most recent development, two teenagers were arrested by the Criminal Investigation Department (CID) on Friday for spreading racial hatred.

The suspects were picked up at Homagama and Colpetty. If convicted they face a jail term of seven years under the prevailing state of emergency regulations, Police Media Spokesman Superintendent (SP) Ruwan Gunasekera said.
Investigators have also found out this same group had been previously involved in similar campaigns in several parts of the country with the aim of whipping up racial hatred while targeting a particular community.
According to investigators this group is also believed to be funded by certain Lankan expatriates while there are also serious allegations in the involvement of local politicians.

In the meantime, Weerasinghe of Mahasohon Balakaya was arrested along with some 100 of his followers including 10 ring leaders who were allegedly involved in the violence and they are currently being held without bail.
Meanwhile, local residents lashed out at the authorities for failing to curb the activities of this so-called extremist group even allowing it to operate from the heart of the town with name boards and everything else. “This group and their activities were known to the police and even to the governments both present and past but nothing was done to outlaw them and this is the end result”, Chairman of the local mosque Ahamed Shibly said as he led the faithful for Friday prayers.

He was speaking amidst the ruins of a mosque in Digana that had been vandalized and partly torched by the mobs in broad daylight earlier in the week, so much so that, the faithful were forced to hold Friday prayers on the road.
Having said all that the Chairman of the mosque does not harbour any hatred against those responsible for the attack except to add that the law must take its course and the suspects must be punished accordingly.

Attackers were
mainly outsiders
He also added that the local villagers were not a part of the mobs and that these people were outsiders and many of them had their faces covered to apparently prevent identification.
However, he said that there would have also been local involvement to a lesser extent and that explains those who had their faces covered. “Nonetheless, I cannot confirm this”, Shibly concluded.

J. M. Niyaz is a successful trader in the town of Kengalle and he has lost everything to the violence.
“Some 90 per cent of my customers are Sinhalese and it is with their help that I am a success story but all that has vanished in a moment of madness. The rioters were not from the neighbourhood, most of them were youngsters, they all had one thing in mind, and that was to destroy Muslim homes and facilities.

The mosque across the road was not spared and even copies of the Quran were torched.
Interestingly the main suspect behind the violence was known to me and my family from his infancy since he is an immediate neighbour.
I even use to carry him as a toddler but somewhere down the line he has been radicalized. This is very sad, it should never have been the case”, he added.

Even as he speaks the smell of rotting meat and poultry products emanates into the atmosphere since his electricity supply has been disconnected and therefore the refrigerators are not in operation.
Down the road at the next shop a group officials from the Divisional Secretariat are inspecting the damages for evaluation prior to providing compensation payments.
Their task is complicated and difficult because some places and equipment have been completely burnt out and they will have to depend on what the claimants declare.

Meanwhile, the Government for its part is on damage control mode providing safety assurances to the citizenry and compensation payment at the very earliest.

As a precautionary measure, the Government also beefed up security in other known hot spots in the South and elsewhere in the country where there is a sizeable concentration of Muslims while lawmakers from across the political divide took to the floor of the House to blame the Government for failing to contain the violence. United National Party (UNP) MP Mujibur Rahman said that he is ashamed to be a part of the Government and blamed President Maithripala Sirisena, Prime Minister Ranil Wickremesinghe and even the Inspector General of Police (IGP) Pujith Jayasundera for failing to heed to his warnings. He told Parliament that he had warned on the possibility of communal violence but no one was prepared to listen and now the rest is history.

Meanwhile, the left-leaning Janatha Vimukthi Perumana (JVP) blamed Muslim politicians saying that they were not doing enough to control extremism in their community. JVP MP Bimal Ratnayake said there is extremism in the Sinhala, Tamil and even the Muslim communities and called on the political leaders to address this issue at the very earliest. Joint Opposition (JO) MP Vasudeva Nanayakkara alleged that a top Minister was affiliated to this so- called Mahasohon Balakaya and that he would reveal his name to the country as soon as possible.

He further claimed that this particular minister had instigated the recent communal clashes and even the name of this extremist group was suggested by him.