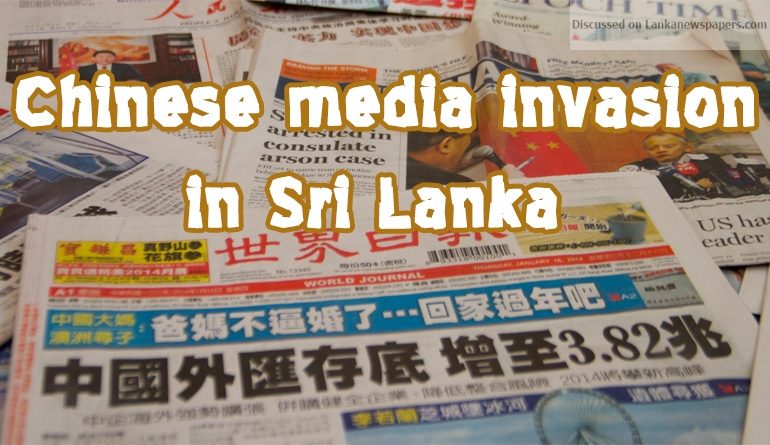 While Chinese investments started to pour in from the time Mahinda Rajapaksa became President and got close to China, concerns were raised that China was working underhand to make use of Sri Lanka to meet its military and political goals.

However both the past and current Governments dismissed speculation that Sri Lanka was soon going to be used as a base by the Chinese to achieve a hidden agenda.

As Chinese investments continued to flow in and Chinese projects take shape, there is now a slow and steady “invasion” of Chinese media in Sri Lanka.

Most Chinese media, if not all, who have established a base in Colombo or have correspondents in Colombo are either linked to the Chinese Government or have the unwritten rule that they work in the best interest of China.

Xinhua is the state owned Chinese news service and has, over the past couple of years, expanded its operations in Sri Lanka by way of staff and coverage.

Xinhua is the biggest and most influential media organization in China, as well as the largest news agency in the world in terms of correspondents worldwide. Xinhua is a ministry-level institution subordinate to the Chinese central government, and is the highest ranking state media organ in the country alongside the People’s Daily. Its president is a member of the Central Committee of China’s Communist Party.

Officials from China Times were in Sri Lanka recently and met President Maithripala Sirisena as well as other officials.

China Times reported that their top officials were in Sri Lanka on a familiarisation visit as they looked to establish their bureau in Colombo.

The Sunday Leader learns that they have since sought approval from the Media Ministry to begin media operations in Sri Lanka.

Most of the Chinese media institutions which have setup base in Colombo have recruited local staff, including reporters, to work with the Chinese journalists.

Some of these journalists are attached to other local media organizations in Sri Lanka and work on a freelance basis with the Chinese media.

A clear directive given to the local journalists is to ensure a pro-China message is carried in most of the reports they file.

All Chinese funded projects in Colombo are hailed by the Colombo based Chinese media as being key investments for Sri Lanka.

Reports published in the Sri Lankan media critical of some Chinese projects are seen by most of the Chinese media based in Colombo as unfair, biased and unacceptable.

The Chinese media have also established links with Sri Lanka’s state media in an attempt to get China’s message out to Sri Lanka using the local media.

Some of the Chinese journalists have also established close links with Sri Lankan politicians, experts and others to take forward the message China wants promoted in Sri Lanka.

Pictures appearing on some of the websites of these Chinese media show the links they have with some well known and influential Sri Lankans.

Some countries, including Sri Lanka’s closest neighbor India, are keeping a close eye on the role played by the Chinese media in Sri Lanka.

Western countries which have now started working very closely with the current Sri Lankan Government, are concerned the Chinese media maybe involved in work which is not just related to journalism.

The Sunday Leader learns that some Chinese journalists are involved in various businesses in Sri Lanka apart from representing a media organization.

India has already been very open about its concerns on Chinese involvement in projects in Sri Lanka.

Hinting at security concerns over Sri Lanka handing over its strategic southern port of Hambantota to China, India’s Defence Minister Nirmala Sitharaman had recently raised doubts whether that country would confine itself only to port activities.

She noted the Sri Lankan Government had handed over the port to China on a 99-year lease after having failed to repay a loan. On whether China setting up its ‘base’ in Hambantota port posed security threat to the country and whether India was prepared to face the threat, she said, “whether China will use the port only for port activities is a question mark and my reply answers all your queries.’

US lawmakers had also raised concerns over China’s role in the Hambantota port.

Hambantota was discussed last year when the lawmakers expressed concerns over the ambitious ‘One Belt, One Road’ (OBOR) initiative of China and sought recommendations for improving development finance efforts.

While infrastructure investment is desperately needed across the region, there’s more to the ‘Belt and Road’ initiative than meets the eye, Congressman Ted Yoho, Chairman of the House Foreign Affairs Subcommittee on Asia and the Pacific had said.

Though China has promoted the program as generous win-win assistance to its fellow developing nations, the OBOR seems motivated primarily by self-interest, he said during a Congressional hearing on development finance in Asia.

“China built an economically unviable port in the hometown of Sri Lanka’s corporate former or corrupt former leader; converted its interests to equity when Sri Lanka could not service the resulting debt and now owns a port along its maritime energy supply route through the Indian Ocean,” he said.

China has however been emphatic in its claims that it has no hidden interests in Sri Lanka.

Sri Lanka has also looked to dismiss any fears India or any other country has on the Chinese presences in Sri Lanka.