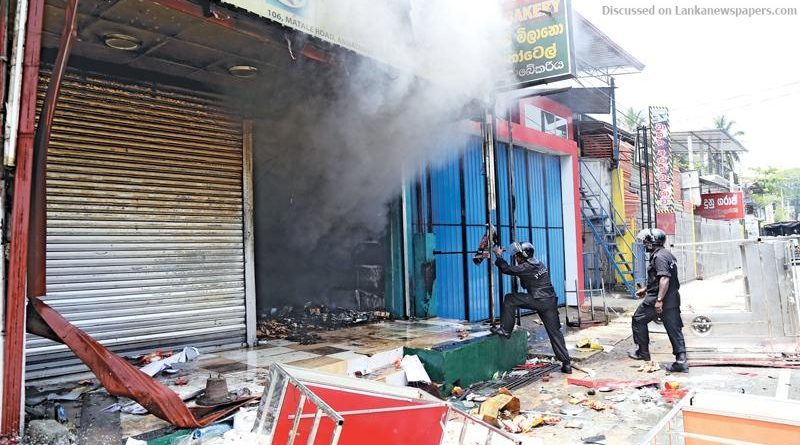 DIGANA: As news spread about unrest in Teldeniya following the funeral of lorry driver A.P. Kumarasiri on Monday (5), Padmini Senarath Yapa says the first thing her husband was to remove the sign above their gate that said “Masha-Allah”.

By Wednesday, looking around her broken front door and shattered light fittings, Padmini slaps her forehead with her palm. “We forgot that there is another sign on top of our front door,” she moans.

With police and government leaders claiming that most of the mob were bussed in from outside the local area, many residents of Digana believe that Muslim homes and businesses were so precisely targeted by the little stickers and signs on their gateposts and doorways giving praise to their God. But others debunk that claim, insisting that the outsiders had to have been led by people from the village to target attacks against one community so precisely.

Mohammed Thaibu, an elderly man whose business was completely burnt by rampaging mobs in Digana last Tuesday (6), scoffs at the outsider theory. “My shop name is simply R.H. Communication. How on earth would people from outsiders know I owned it,” he argues. A room in Thaibu’s house attacked by a mob just up the street from the communication, lay in ashes, an old Singer sewing machine now the sole occupant. The old man’s eyes well up and his whole body heaves with dry sobs as he surveys the damage. “I lived among Sinhalese all my life – I played with them in school and traded beside them. I can’t understand what happened here,” he says, bewildered.

Thaibu’s shop and residence is a few houses down the lane from Padmini’s own home, down Colongahawatte Road. She heard the commotion when the mob burned Thaibu’s communication kiosk.

When they heard the mob proceeding down the road, her whole family rushed to an unfinished part of their house upstairs and put their hands over the children’s mouths to prevent screaming.

“I heard the sound of metal clashing and terrible profanities. It was so loud and it got closer and closer to us,” she recalls vividly. With the house closed up, the mob started to bang on the front door, demanding residents come out and face them.

“Then they started to bang on the door. Each time they hammered the front door with their poles, I felt like someone was hammering my chest. We installed that wooden door long years ago, when were still struggling for income,” Padmini explains.

Married to a Muslim man from Digana for 32 years, Padmini is a Sinhalese from Colombo. She practices Islam now, they have four children and have learned the art of peaceful co-existence over the years.

“I have read both religious texts. I know that the essence of both faiths is the same – live a good life, do no harm. The failure to understand this is why violence has spilled out on the streets in our village this week,” she philosophises gently.

The village was largely peaceful all these years, Padmini who moved in to Digana after her marriage explains. “Most people are good. But among them, there may be a few bad eggs.”

For instance, her husband’s bus was saved from the mob by their tenants living upstairs, who happened to be Sinhalese. The lady, who did not wish to be named in this article, said she and her husband had stood in front of the bus and waved the mob away. “We are all human beings after all, how could we allow them to do this? We said the bus was ours,” she says. Convinced, the mob moved on.

Amidst the still-burning carnage of shops and houses in Digana, stories of hope and community also shone through. Sheltering Thaibu and his extended family of 12 were the Somasiris, who live further up the road. The Muslim family ran into the shrubs behind their neighbour’s home when they heard the mob crashing through the village.

“We have known his family for years. Of course we had to protect them, it was the human thing to do,” says Syliva Somasiri. Sylvia and her family provided food and shelter for all their Muslim neighbours who rushed there seeking refuge and protection.

The Somasiri family blames police inaction for the extent of the damage in the village. Even when the mosque in the village was being attacked, there were only four police officials there to control the violence, they say. “They just watched. How did the mob move through 4-6 kilometers in this area without the police realising it?” says Sylvia.

Asked if she feared the wrath of the mob for daring to shelter Muslims, Sylvia responded that it could have happened, but fortunately, she said, the rioters just moved on. “In any case, there were small children with these families. We couldn’t just stand by and watch.”