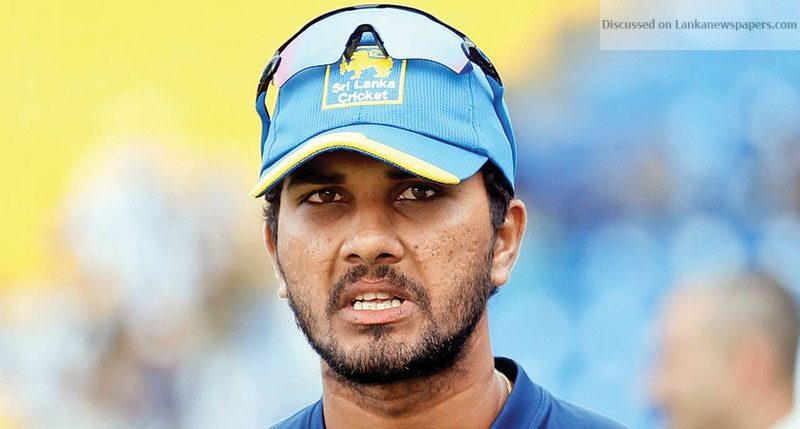 Sri Lanka will be without their skipper Dinesh Chandimal when they take on India once again in the fourth T20 of the Nidahas Trophy to be held at R. Premadasa Stadium today.

In absence of Dinesh Chandimal, all rounder Thisara Perera has been appointed to lead the Sri Lanka team in the next two games. Perera led the team in the T20 series in Pakistan last year followed by T20 and ODI series in India before he was removed and Angelo Mathews was named captain ahead of the SL tour of Bangladesh early this year.
Chandimal received a two match ban by ICC due to slow over rate in Saturday’s game against Bangladesh, while Bangladesh skipper Mahamudullah Riyad had been fine 20% of his match fee.

“In accordance with Article 2.5.2 of the ICC Code of Conduct for Players and Players Support Personnel, which relates to serious over-rate offences, players are fined 10 per cent of their match fees for the first two overs and 20 per cent per additional over their side failed to bowl in the allotted time, while the captain receives two suspension points.”
As two suspension points equate to a ban from one Test or two ODIs or two T20Is, whatever comes first for the player, Chandimal has been suspended from his side’s 12 and 16 March fixtures against India and Bangladesh respectively, while each of his players have received a fine of 60 per cent.

Chandimal pleaded not guilty to the offence, and, as such, Mr Broad announced his decision following a hearing that took place on Sunday afternoon. The hearing was attended by the match officials and the Sri Lanka cricket team management,” stated an ICC press release.

Dhananjaya de Silva is the only other batsman in the SL squad and will most probably replace Chandimal in the playing XI.
Earlier on Saturday night Sri Lanka’s winning streak of eight straight international wins was hampered by Mushfiqur Rahim’s show and now all three teams have one win each under their belt, though Sri Lanka hold the edge thanks to a superior net run rate with three more games to go before the finals.

Sri Lanka have confidence on their side as they have already beaten India once in the tournament, but India have found their rhythm with a win in their last match against Bangladesh. Shikar Dhawan who hit 90 against Sri Lana is in red hot form with another half century in the Bangladesh match, while skipper Rohith Sharma who has been dismissed cheaply twice so far, will be eyeing to make a statement.

So far Kusal Janith Perera and Kusal Mendis have been prolific for SL, as both of them scored three half centuries in the last four T20s they played in. But the middle order wobble is of concern for Sri Lanka where they could not make much of a contribution in both games. Dasun Shanaka’s promotion to number four did not prove successful, though Upul Tharanga managed to play a cameo down the order.

Sri Lanka have bowling options in the form of experienced campaigner Suranga Lakmal and Isuru Udana, together with left arm spinner Amila Aponso in the squad, who could come in to strengthen the bowling department.
Squads: