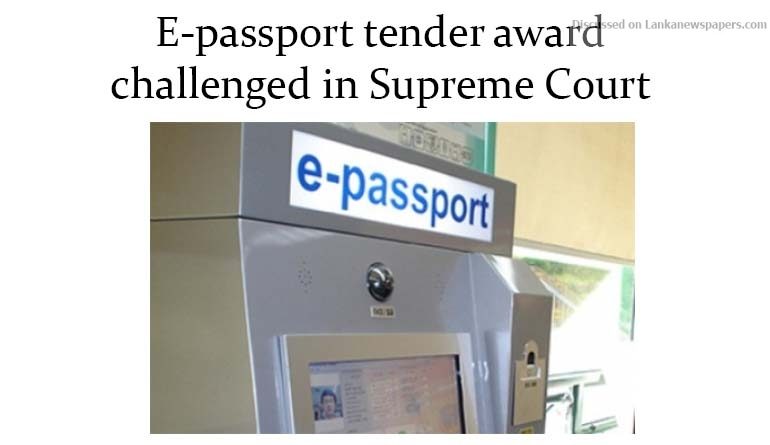 Sri Lanka’s new bio-metric E-passport project has been embroiled in a legal mesh as a result of the attempt made by the authorities to award the contract to De La Rue Lanka Currency and Security Print Ltd (De La Rue Lanka Ltd) through a non-transparent and unsolicited, single-source procurement process.

Objecting to the award, a fundamental rights case has been filed in the Supreme Court which would be taken up for hearing tomorrow, Monday, with the petitioner requesting an open, competitive tender.

It has been filed by Epic Lanka Ltd, a Sri Lankan company which has been serving the Department of Immigration and Emigration (DIE) for the past 15 years in the supply of passports and maintenance of the passport printing system.

While the government is said to be spending Rs. 1.2 billion in granting the tender to De La Rue, the petitioner has claimed they could do it for less according to international standards.

In its petition, Epic Lanka Ltd says it has 257 Sri Lankan IT engineers among its staff members and has so far supplied approximately 8 million passports since 2003.
It is the ‘only’ company in Sri Lanka qualified to bid for international tenders for passports and secure ID cards, the petition revealed.

It has also urged the judiciary to issue an interim order suspending the operation of the project while preventing the authorities from entering into any kind of Memorandum of Understanding, contract, agreement, or such similar arrangement with De La Rue Lanka Ltd to issue E-passports until the final hearing and conclusion of this application.

The petitioner has requested an appropriate order to call for an open competitive tender for the award of the E-Passport Project in terms of the applicable Government Procurement Guidelines.

The petitioner claimed that the cabinet has been misled to give permission for the contract to be handed over to De La Rue Lanka Ltd.

Despite DIE’s systematic attempt to introduce an E-passport, the Information Communication Technology Agency (ICTA) together with the Ministry of Telecommunication and Digital Infrastructure (MTDI) had proposed to the Cabinet committee on Economic Management (CCEM) in early 2017 that they would undertake the task of implementing an E-passport to Sri Lanka.

The E-passport matter comes under the purview of Ministry of Internal Affairs and Wayamba Development. But this aspect was ignored by ICTA and MTDI, the petitioner alleged.

It has been revealed that the cabinet paper presented to hand over the contract to De La Rue Lanka Ltd had mentioned a tender process is not needed as 40 per cent of the company’s shares are owned by the Finance Ministry making it a state-affiliated company.

However, according to the petitioner, in spite of 40 per cent of the shares being owned by the state, De La Rue cannot be identified as a state-affiliated company.

They have also claimed that to be a state-affiliated company the state should obtain either 50 per cent or more shares of the business.

A Cabinet Memorandum dated May 25, 2017 was submitted by the Prime Minister seeking Cabinet approval to proceed with ICTA’s proposal to implement an E-passport with DeLaRue Lanka Ltd.

According to official documents, the President submitted his observations on the ICTA proposal directing the authorities to submit a joint cabinet memorandum on the E-passport Project by the MTDI and the Ministry of Internal Affairs.

He also ordered the authorities not to proceed with single source bidding to procure E-passports even though government has a 40 per cent stake in De La Rue Lanka but to call multiple bids or to call bids under the ‘Swiss Challenge’ process.

Considering the observations made by the President, the Cabinet of Ministers met on June 13, 2017 and deferred the E-passport project subject, which was included in the Cabinet Memorandum No. 17/1093/702/002-XI submitted by the Prime Minister.

Despite the Cabinet decision and the President’s directives, the then Managing Director of ICTA Muhunthan Canagey presented a Board Paper on June 27, 2017 (or on a closer date) to obtain board approval to enter into a MOU between the ICTA and De La Rue Lanka Ltd to conduct a requirement study and to propose an E-passport solution for the DIE, the petitioner claimed.

The MTDI then forwarded a paper (draft cabinet memorandum) to the Ministry of Internal Affairs requesting its consent for this purpose but it was rejected by the latter.

Subsequently the MTDI amended the contents and submitted a fresh Cabinet Memorandum (No. CM/16/2017 under the signatures of Ministers S.B. Navinna and Harin Fernando and it was approved by the cabinet on August 17, 2017 to obtain the engagement of De La Rue Lanka Ltd.