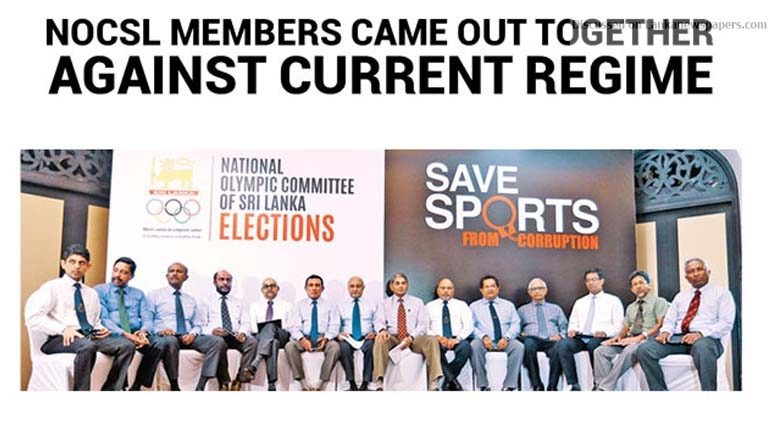 Fourteen strong members of the National Olympic Committee Sri Lanka (NOCSL) came together to make an official announcement of the candidacy for president at the upcoming NOC elections where the President of the Amateur Rowing Association of Sri Lanka Rohan Fernando would run for the office against Colombo Business Tycoon Suresh Subramaniam.

They will be running on a platform of anti-corruption under the banner “Save Sports from Corruption.” As they described the amount of corruption and misconduct which had taken place at the NOCSL for the past several years and had badly affected the country’s sports.

“The pathetic turn of events at the NOC includes the complete lack of accountability for the vast amounts of funds received for the development of sports and sports related activities,” stated Fernando who described that sitting office bearers were able to sit for office four more years without an election after they successfully mislead the IOC by leading them to believe that NOC had been affected severely by outside pressure from the Sports Ministry.

“During the last several years the sporting community had silently suffered the consequences of the animosity between the Ministry of Sports and the National Olympic Committee. Based on the misrepresentation of facts and short of a supervisory mechanism, the International Olympic Committee was made to believe that the NOC was affected by external pressure from the Minister of Sports. On this premise, the current regime managed to continue on their act of plundering NOC resources.”

Rohan Fernando also presented a 15-Point Action plan for improving sports in the country in detail. He also revealed, that apart from the 14 members who were present on the podium there were six other members too, who were willing to vote for them and was present at the venue but afraid to come out as they have been threatened with removal from participating at the upcoming Commonwealth Games and so on.

In the opposition campaign Subramaniam who has the blessing of the incumbent president Hemasiri Fernando, boasted about how many millions he will bank for NOC if he gets to office. They also announced candidacy for other positions as well with Maxwell de Silva once again running for general secretary with an eye to run the show for four more years, as has happened, it’s highly unlikely that businessman Subramaniam will attend NOC five days a week, if he wins. Rugby president Asanka Seneviratne announced his candidacy of Vice President.

Unlike them, Rohan’s party has not announced any candidacy as they said nobody with them are looking at any positions as office bearers at NOC and are there with one aim, that is to change the present regime as one unit.