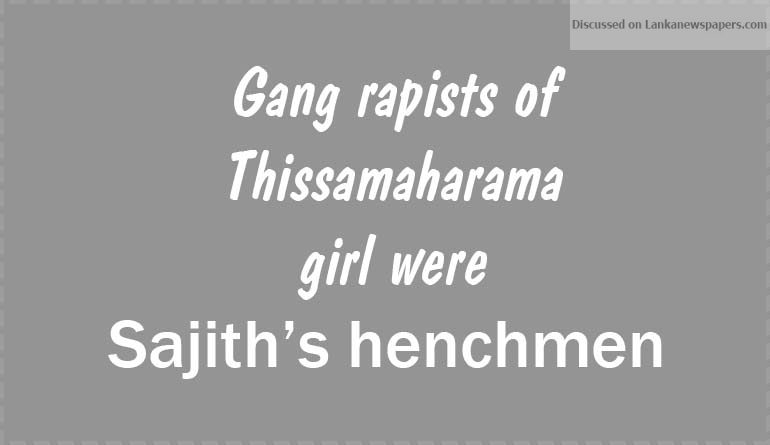 It is reported that the three suspects who were arrested for an incident of gang-raping at Konewalana Grama Seva Division in Thissamaharama had been directly involved in election campaigning on UNP candidates contesting for the Thissamaharama Pradeshiya Sabha.

The 14-year girl who was gang-raped by the suspects attempted to commit suicide by hanging but was rescued and was hospitalized. However, she died despite being treated in the ICU at Hambanthota General Hospital for five days.
The three suspects, who gang-raped the girl, were caught by the villagers hiding in the Yala sanctuary on the 11th and were handed over to Weerawila Police. The suspects were remanded until the 23rd after they were taken before Thissamaharama Magistrates Court. As the suspects were seriously injured when villagers assaulted them when they were found hiding in the jungle they have been admitted under security from prison guards to Hambanthota General Hospital for treatment.
According to what is being revealed the girl’s boyfriend E.D. Roshan Dilan, his friend G.G. Lahiru Prasanna and another friend had taken liquor near the girl’s house. They had gone to the girl’s house, called her out and had taken her to another place where they gang-raped her. Later, the girl had been brought back home.
Jayasiri, the father of G.G. Lahiru Prasanna is a strong UNP supporter. The election office of the candidate from the UNP to Magama ward is at the residence of the said G.G. Lahiru Prasanna and it is said that the three youths have got the liquor they consumed from the UNP candidate. It is said that this candidate usually treats his supporters with liquor.
The Minister of Housing Sajith Premadasa who had come to the girl’s residence yesterday (16th) had given Rs. 25,000 to the relatives of the girl saying he or the candidate has nothing to do with the crime.
However, black flags have been hoisted throughout the area and the election campaign office of the UNP candidate has been removed. The candidate is hiding due to the uproar against him.
Social analysts talking about this incident say the tragedy of youths being lured to take liquor and engage in other vices instead of educating them and directing them to do services to the community is reflected from this incident and candidates, from whatever party they have been nominated and who incite youths for liquor instead of educating them and directing them to the service of the community should be rejected by the voter.