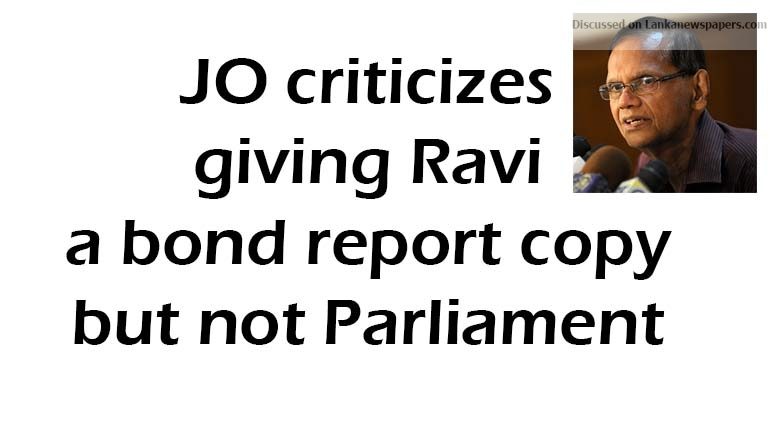 The Joint Opposition (JO) yesterday said the move to give former minister Ravi Karunanayake, an accused of the bond fiasco, a copy of the bond report but not Parliament was absurd.

“This has enabled him to prepare for what’s coming in the future. What is the objective of giving Mr. Karunanayake a copy and not Parliament? If a copy was given to him, can anyone make sure that another copy won’t end up with Arjuna Mahendran or Arjun Aloysius? This is all a part of a plan to create the background. That’s why it is taking time to present it to Parliament,” he told a news briefing.

He said there was a deal between the UNP and the SLFP. “UNP supports President Maithripala Sirisena to continue as President even with criticisms and in return the SLFP to continues to protect UNP thieves,” he said.

He went on to note that no action has been taken so far to bring back Arjuna Mahendran from Singapore.

Meanwhile, MP Bandula Gunawardana said Central Bank Governor, Monetary Board or the Public Debt Department should immediately make a statement whether there has been bond transaction frauds since 2008 to 2014 as claimed by Prime Minister Ranil Wickremesinghe.

“Prime Minister Wickremesinghe made a special statement in Parliament and said Rs. 4,702 billion worth bond transactions during 2008 and 2014 were not transparent. Therefore, the Central Bank should clarify this,” he said.