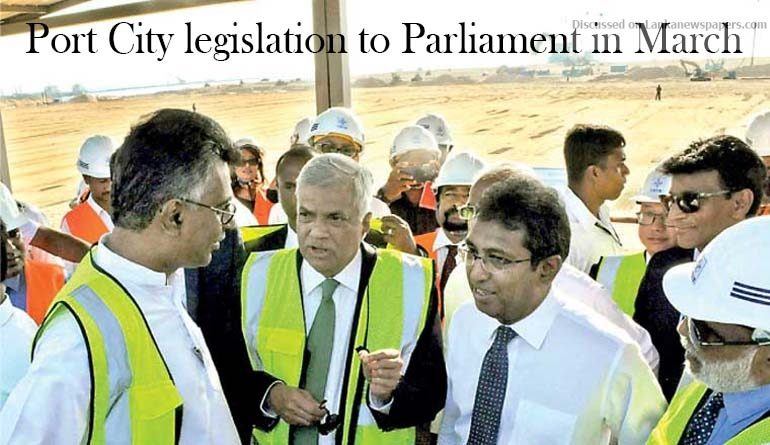 Legislation for the Colombo International Financial City is expected to be brought before Parliament in March this year, top officials revealed yesterday during a tour of the project.

Prime Minister Ranil Wickremesinghe, accompanied by Megapolis and Western Development Minister Champika Ranawaka, while on an inspection tour of the Port City project said that new laws to regulate the proposed financial capital would be presented to Parliament in the coming months.

“The foremost goal of the Port City is to make it the financial hub in the Indian Ocean. New laws and regulations will be needed for a project of this magnitude and we will be presenting these new legislations to Parliament early this year,” the Premier said.

He noted that by 2020 all infrastructure work would have been completed.

Minister Ranawaka, who also addressed the media afterwards, said that Port City legislation would be brought before Parliament by March and that construction on the first permanent buildings is to commence this year as well.

“Construction of the three towers, each 60 storeys high, will begin this year with a foreign investment of $ 1 billion. Legislation for the project will be before Parliament in March,” Minister Ranawaka said, adding that the Port City would be Sri Lanka’s first fully-planned city.

Meanwhile, Port City Project Director Nihal Fernando, speaking to the Daily FT, revealed that construction on the three towers would begin in the middle of this year.

“These three towers are part of the International Financial Centre. China Harbour Engineering Company is providing an investment of $ 1 billion for this purpose and construction is scheduled to begin around June or July,” Fernando said.

He further divulged that the three towers were a mix development project with retail and office space as well as several hotels.

“These will be the first permanent buildings of the Port City,” Fernando added.