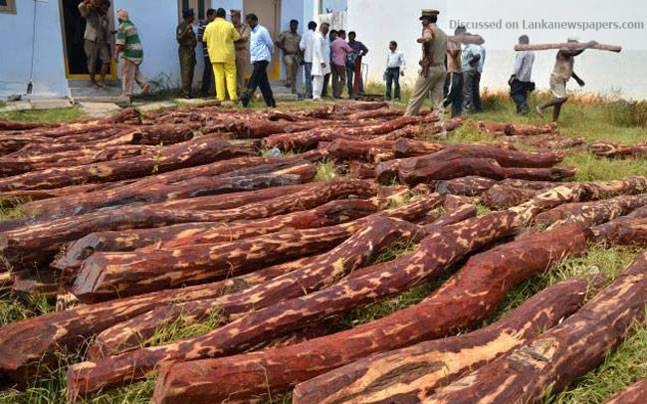 The Crime Investigation Department (CID) in Andhra Pradesh is seeking assistance from the Interpol to extradite the wanted red sanders’ smugglers hiding in different countries including Sri Lanka, Nepal, Singapore and Myanmar, The Hindu reported yesterday (2). “The CID, which is the central agency for the Interpol in Andhra Pradesh State, is trying to bring the notorious smugglers wanted for red sanders’ cases in different Police jurisdictions,” said CID Additional Director-General (DG) of Police Dwaraka Tirumala Rao.

“The Anti-Smuggling Task Force is doing a great job in protecting red sanders’ plantations in Chittoor, Kadapa and Anantapur districts in the State. Task force teams arrested close to a thousand smugglers, with some hiding in different countries,” the Additional DG said. The CID, who is following up cases filed against the smugglers in various Police stations, was entrusted with extraditing the wanted red sanders’ smugglers. About 30 notorious smugglers were hiding in China, Malaysia, Dubai, Abu Dhabi, Sri Lanka, Nepal, Singapore and Myanmar. “Already we issued red corner notices and a team met the Interpol personnel. We will meet the Interpol Police again to extradite the smugglers of other countries,” Tirumala Rao told The Hindu. Around 25 international smugglers have already been arrested when they visited the country to make hawala transactions, check the quality of the stocks and hold talks with the local parties.

However, 30 more international smugglers are wanted and cooperation has been sought from the CID and the Central Bureau of Investigation (CBI) to arrest them.