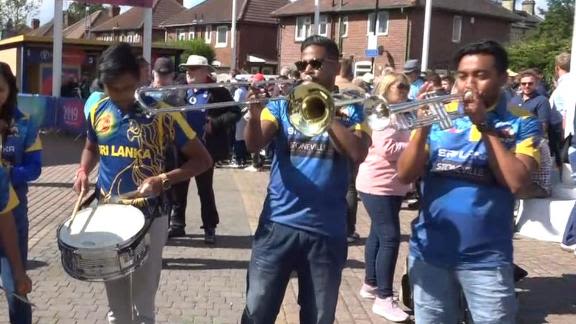 The infectious music of the wildly popular Sri Lankan papare bands will soon be heard at the T20 World Cup.

Hundreds of Sri Lankan cricket fans in the UAE were disappointed when they were asked not to bring musical instruments into stadiums in the UAE during the T20 games.

Groups of families who carried drums to Sunday’s game against Bangladesh were turned away by security at the Sharjah Cricket Stadium. They were allowed in once they put the drums back in their cars.

Drums, cymbals and trumpets make up the papare music that is central to the Sri Lankan cricketing experience.

The bands often follow the Sri Lankan cricket team around the world and the instruments have been permitted in previous games in the UAE.

The ICC said venues would now be “happy to accommodate musical instruments”.

“There were some restrictions as per the terms and conditions of venues which had to be adhered to,” an ICC spokesman told the Abu Dhabi newspaper The National.

“Some instruments were not allowed but we are liaising with venues and our security advisers to lift those restrictions, since we understand the need to build up the atmosphere.”

Sri Lankans say they have grown up with papare music that is a fixture at cricket matches of all levels.

Sports lovers are delighted their special brand of music will be cleared in time for the games against Australia and South Africa on Thursday and Saturday.

“We need our music, we need the papare. It’s not the same in the stadiums when you cheer without the papare,” said Dubai resident George Hettiaratchy.

“We like to sing, dance and enjoy our cricket. This is how Sri Lankans enjoy matches. We assured ICC that we will comply with all safety guidelines.”

Describing themselves as “music lovers who love popular papare music”, several fans wrote to the ICC appealing for permission to take the instruments into stadiums.

At this year’s World Cup T20 games, music is blasted over the public address system and drummers in traditional costumes can be seen near the boundary.

But fans said this was not the same as bringing their own musical instruments to play familiar tunes that spectators enjoyed.

In the past, the Sri Lankan community pooled together to fly papare musicians from their home country to the UAE.

With money shorter during the Covid-19 pandemic, they decided to rely on local musicians for the T20 games.

“This time it was difficult to get sponsorship but if we qualify for the semi-finals, 100 per cent we will bring the papare from Sri Lanka,” said Mr Hettiaratchy.

Sri Lankan national Dimantha Mark and his son practise songs before big games. He said children were disappointed when they were not permitted entry with drums for Sunday’s match, when Sri Lanka beat Bangladesh.

“We had to walk back a few kilometres to keep the drums back in the car,” he said.

“We tried to explain to the security that we have taken the drums for previous matches. Win or lose, we want to cheer our team and this music is part of us.”

During the 2011 World Cup, Sri Lankan officials barred drums and bands from venues, along with a ban on defamatory banners, posters and glass bottles owing to security concerns.

The ban on musical instruments was later withdrawn following objections from fans.