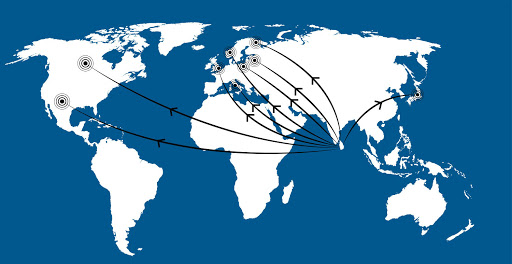 Sri Lanka’s export performance continued its upward momentum in the first three months of 2021. Due to the Covid-19 pandemic induced lockdown last year, exports were contracted by a record 64.63% in April 2020. However in April this year, exports grew up by 183% to US$ 798.9 million in comparison to the previous year.

This growth could be attributed to the gradual lifting of Covid 19 restrictions imposed within the country and globally. It must be noted that the year-on-year growth in April 2021 was largely due to the negative growth a year ago.

The Export Development Board (EDB) Chairman Suresh de Mel (pictured) said, “in comparison to the lowest point in April 2020, exports are up by 183% in April 2021. We thank the entire export community for serving the national economic needs at this vulnerable time. The EDB staff and I stand committed to help our exporters through this crisis in the best way possible”.

Earnings from the export of major product sectors such as Apparel, Tea, Rubber based Products, Coconut based, Spices and Electrical & Electronic Components were increased both in the month of April 2021 and during theperiod of January to April 2021 compared to the previous year.

Export earnings from Spices and Essential Oils in April 2021, increased significantly compared to April 2020- growthis mainly due to increased exports of cinnamon, pepper and cloves.

Export earnings of tea increased y.o.y. in April 2021 by 1.14 % compared to April 2020. First four months comparison records at19.79 % increase – The higher performance is due to demand growth of UAE, China and Libiyan markets.

The single largest export destination of United States of America recorded US$ 920.6 Mn worth of exports in the period of January to April 2021–a significant year on year increase of 21.2 % in comparison to US$ 759.58Mn recorded in 2020.

Exports to United Kingdom as the second largest trading partner recorded an increase of 16% to US$ 294.23 Mnduring the period of January to April 2021compared with the corresponding period of previous year.

The services exports estimated by EDB which includes ICT/BPM, Construction, Financial services and Transport and Logistics show exports of US $ 1,194.3 Mn for the period of January to April 2021 compared to US$ 1,021.9 Mn recorded in the corresponding period of 2020.