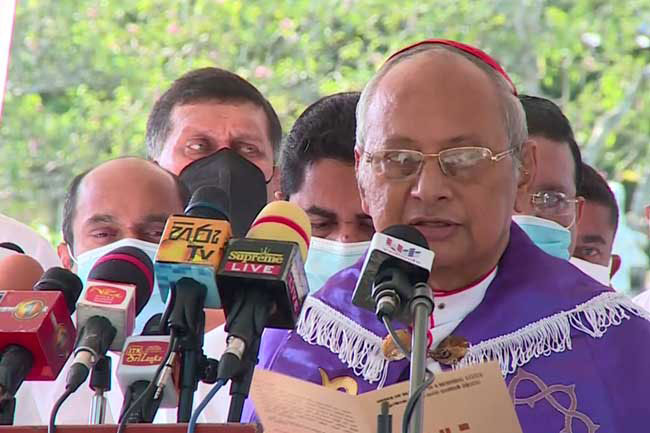 His Eminence Malcolm Cardinal Ranjith, Archbishop of Colombo, today requested the public to observe two minutes’ silence at 8.45 a.m. on April 21 as a mark of respect for the victims of the Easter Sunday bombings.

Sri Lanka on Wednesday marks two years since the devastating Easter Sunday attacks, which killed over 250 in bombings at three churches and three luxury hotels.

Cardinal Ranjith stated that they decided to request all communities in the country to observe 2 minutes’ silence as the first blast had occurred at 8.45 a.m. on the morning of April 21, 2019 at the St. Anthony’s Church in Kochchikade.

He said that the Catholic churches in the country will be observing the 2 minutes’ silence and that all Catholics in Sri Lanka have also been requested to do the same.

“We are requesting all the people in the country, especially the religious leaders, to join us in observing two minutes of silence by considering this as a national issue,” he said.

He said that all Catholic churches in the island have been asked to ring bells at 8:45 a.m. and observe two minutes of silence before once again ringing the bells. Afterwards candles or oil lamps will be lit in remembrance of the victims of the Easter attacks followed by various religious observances.

The Archbishop said that he will be participating in the main service at the St. Anthony’s Church in Kochchikade along with several other religious leaders, diplomats and dignitaries.