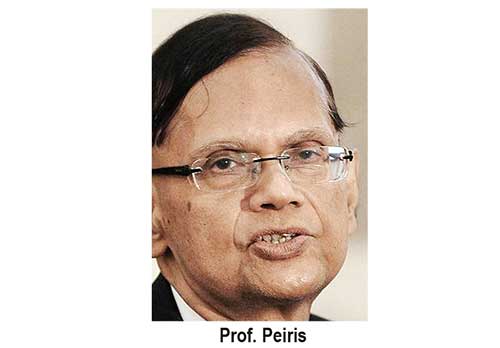 Govt. committed to domestic mechanisms to address grievances whatever the Geneva outcome – GL

SLPP Chairman Prof. G.L. Peiris yesterday (22) declared that regardless of the outcome of the vote on a new accountability resolution against Sri Lanka at the Geneva based UNHRC, the government was committed to domestic mechanisms to address the grievances of those affected.

Prof. Peiris addressed the media several hours before the Geneva vote was to take place.

At the onset of the briefing, Prof. Peiris said that China would ask for a vote on the new resolution.

Alleging that a section of the international community acted indiscriminately as regards alleged accountability issues, Prof. Peiris revealed that the resolution received the backing of nearly 40 countries.

Claiming that moving the UNHRC had been an external requirement, Prof. Peiris explained how those targeting Sri Lanka adopted an entirely different strategy during the previous administration.

Prof. Peiris said that those gunning for Sri Lanka also found fault with the incumbent government for the delay in conducting Provincial Council polls. The minister said that they never had any issue with the previous government and the Tamil National Alliance (TNA) that cooperated with the UNP to put off the polls. According to him, the UN adopted two different stands in respect of the incumbent government and the previous administration.

Sri Lanka finally decided to seek a vote after talks with the UK led Core Group failed to pave the way for a consensus on the resolution.

While reiterating Sri Lanka’s commitment to friendly relations with members of the UNHRC and international law whatever the outcome of the Geneva vote, Prof. Peiris flayed the Office of Human Rights Commissioner Michelle Bachelet for pursuing an anti-Sri Lanka strategy. The former Law Professor alleged that the HC’s Office acted beyond its mandate. Prof. Peiris questioned HC’s right to question the 20th Amendment to the Constitution, call to repeal the Prevention of Terrorism Act (PTA) and inclusion of retired military personnel in the administration.

The former External Affairs Minister said that the move to authorize the HC’s Office to gather evidence, examine them and engage in an inquiry threatened the sovereignty not only of Sri Lanka but other targeted countries as well.

The one-time Colombo University Vice Chancellor explained how both the US and UK resorted to extraordinary legal and other measures to protect their armed forces deployed overseas whereas they found fault with the Sri Lankan military for neutralizing a domestic threat. The minister said that the government wouldn’t hesitate to introduce new law and even provide constitutional safeguards to armed forces in the face of threats posed by UNHRC action