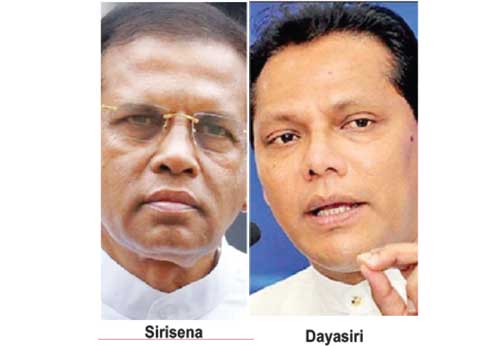 The SLFP parliamentary group has been divided over an abortive bid to replace the Chairman of the party, Maithripala Sirisena, MP, and its General Secretary State Minister Dayasiri Jayasekera, MP.

Sources said that several lawmakers had been involved in the alleged conspiracy, apparently taking into consideration the fact that the report of the Presidential Commission of Inquiry (PCoI) into the 2019 Easter Sunday attacks was likely to affect the political future of Sirisena.

The SLFP is on a collision course with the SLPP over the PCoI report on the Easter Sunday carnage. Sources said that the party had swiftly responded to the threat posed by conspirators by having the Executive Committee re-electing the incumbent Chairman and the General Secretary. However, those seeking to oust Sirisena and Dayasiri were still active, they added.

The SLFP, the second largest party in the ruling coalition, is determined to retain its identity though its offshoot, the SLPP emerged as the leading party with its impressive performance at the 2018 local government election, the 2019 presidential and the 2020 parliamentary polls.

Contacted for comment, one of the SLFP rebels said Sirisena had himself brought about the virtual downfall of the SLFP, whilst being its long serving General Secretary, by joining forces with the UNP to contest the presidential election in January 2015 and reclaiming the party leadership after securing the presidency.