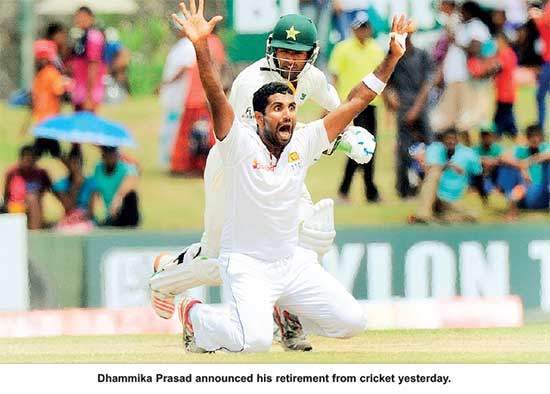 During a training session of the national cricket team 20 years ago, the captain in waiting Marvan Atapattu was troubled by a 19-year-old fast bowler. Marvan was convinced that he saw something special in the quickie and at the end of the session, had a chat to the player and inquired what club he was representing. The bowler was Dhammika Prasad. When he informed Marvan that he had no affiliations so far, the opening batsman urged Prasad to join Singhalese Sports Club.

It has been a long run for Dhammika Prasad. For 19 years, he represented SSC for whom he picked up a record 351 First Class wickets, the highest by a fast bowler for the club. SSC put up a grand show yesterday as Prasad announced his retirement. Marvan was present at the occasion along with another former Sri Lanka captain – Rangana Herath.

“Fast bowlers, you see, always want the red cherry. They want to get the opening batsman out. But as captain and later as coach, I realized that Dhammika was someone who wanted to bowl with the old ball as well. There were situations when there was only ten overs left in the day’s play and the ball was not doing anything and the batsman was 150 not out. Dhammika used to say, give me the ball. That is a great quality of a team player,” Marvan recalled.

Prasad’s family members were present at the occasion as well. “Let me assure you Mrs. Dhammika Prasad, life starts now. You will have your husband 24 x 7. A cricketer is usually busy playing the sport and it is after retirement he gets to spend quality time with his family. As for you kinds, for 15 years you have missed your dad during your important moments. But from here on, he is all yours. He will be there from here on to take you to school. To take you to McDonalds and what not,” Marvan added.

There have been speculations that several Sri Lankan cricketers are announcing their retirements from the sport in order to migrate to USA as there were opportunities there for cricket players. However, Prasad confirmed that he had no intentions to move out of the country.