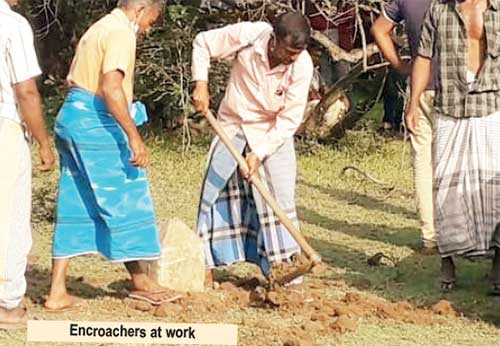 Another 1,000 acres of the Somawathiya National Park were been grabbed yesterday by an organised group who removed boundary posts put up by Department of Wildlife, and placed them further inside the National Park, thus bringing the extent of the sanctuary land encroached in two days to 3,000 acres.

Environmentalists said government supporters were responsible for the land grab.

Biodiversity Conservation and Research Circle of Sri Lanka, Convener, Supun Lahiru Prakash told The Island yesterday that a group led by a high-ranking official of the Medirigiriya Divisional Secretariat had entered the Park on Wednesday had encroached on 2,000 acres of forest land.

“This land grab took place in the Palliyagodella area. We strongly condemn the behaviour of the Divisional Secretary and request the relevant authorities to protect the Somawathiya National Park. If not, it can lead to encroachment of Wildlife protected areas in the country and current deforestation will worsen.”

Defence Secretary retired General Kamal Gunaratne earlier said that he had found that some Divisional Secretaries were issuing licences to clear forest lands and the practice had to be stopped.

Prakash said the officials of the Medirigiriya Divisional Secretariat were acting in clear violation of the Fauna and Flora Protection (Amendment) Act No. 22 of 2009 and the National Environmental Act No. 47 of 1980.

Our sources in the Forest Department confirmed the land grab.

Our efforts to contact the Medirigiriya Divisional Secretary were in vain.

The Somawathiya National Park is one of the main protected areas located in the Mahaweli wildlife region and plays a key role as an important elephant home range.

Prakash, who is also a specialist on the country’s elephants, said that 30% of the free range elephant population in Sri Lanka lived in the Mahaweli Wildlife Region and if they lost part of their home range, it would increase the human- elephant conflict and elephant conservation would be badly affected.

The Polonnaruwa District has reported the second highest number of incidents of the human-elephant conflict, and encroachments will lead to further escalation of the problem in the district, environmentalists say.

There was a similar attempt to encroach on 2,000 acres of land from flood plains in the National Park in Polonnaruwa recently.