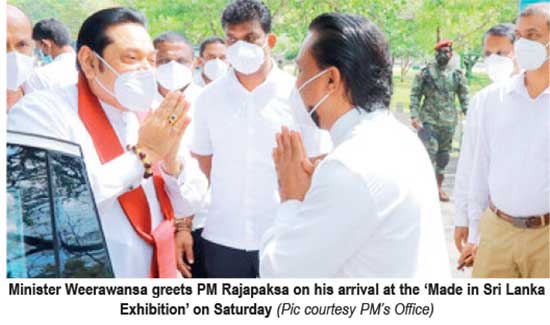 Dispute in SLPP settled by President and Premier

Prime Minister Mahinda Rajapaksa, on the invitation of Industries Minister and National Freedom Front (NFF) leader Wimal Weerawansa, on Saturday (13) visited the ‘Made in Sri Lanka exhibition’ at the BMICH as the SLPP and the NFF tried to settle a simmering dispute caused by Minister Weerawansa calling for a decision-making role for President Gotabaya Rajapaksa in the ruling party.

He also pointed out that current political strategies adopted by President Gotabaya Rajapaksa’s government wouldn’t have been possible without the strong foundation laid during the decade of Mahinda Rajapaksa’s tenure as the President – 2005-2015.

Tourism Minister Prasanna Ranatunga, who attended the opening of the exhibition on the invitation of Minister Weerawansa, the previous day, said that the dispute over the latter’s statement had been settled by President Gotabaya Rajapaksa and Premier Mahinda Rajapaksa.

The SLPP launched a scathing attack on Weerawansa after the NFF leader called for an important position for President Gotabaya Rajapaksa in the decision making SLPP hierarchy. The SLPP accused Weerawansa’s party of having persons with connections with foreign intelligence services in its ranks. Weerawansa, in a statement issued subsequently denied the accusation while requesting the President to initiate an inquiry.

The Gampaha District SLPP heavyweight said that if not for former Minister Basil Rajapaksa forming the party, they would have been in serious trouble today. The Minister insisted that smaller parties had no say in SLPP leadership issue and it would be entirely up to the party. The former SLFPer said that President Gotabaya Rajapaksa had accepted Prime Minister’s leadership. According to him, no one in the government could politically survive by criticizing either the Premier or the President.

Since the eruption of protests over controversial moves to hand over the East Container Terminal (ECT) of the Colombo harbour, Minister Weerawansa twice called meetings at his Colombo residence on January 30 and February 11 to discuss the ECT matter and then the controversy over his advice to the SLPP, respectively. Sources close to Minister Weerawansa told The Island that the SLPP couldn’t continue delaying a decision on President Gotabaya Rajapaksa’s formal role in the SLPP decision making process.