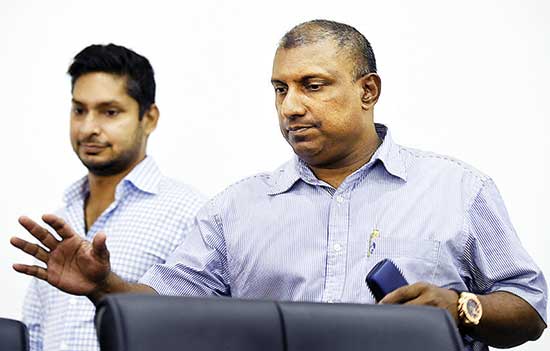 The Sports Ministry yesterday brought Sri Lanka Cricket down a notch by appointing a high profile Cricket Committee. While Cricket Committees in the past used to be an advisory arm for SLC, the role of the body has been diluted in recent times with eminent former players not wanting to be part of the set up.

However, following recent poor showings and a series of on field and off the field controversies, a committee comprising former greats Aravinda de Silva, Roshan Mahanama, Kumar Sangakkara and Muttiah Muralitharan have been brought in to address the slide.

Sources said that the committee will be more than an advisory body and its recommendations will be put into action without any delay or sabotage. The Island learns that during a meeting between SLC officials and Sports Minister Namal Rajapaksa, the former were told to support the Cricket Committee or face the consequences – the appointment of an Interim Committee.

“We are here to look at all cricketing matters. Obviously, we need to restructure First Class cricket, but looking at the sport at grass root levels is equally important. We will come up with short term, mid term and long term solutions to some of the problems we face,” Aravinda de Silva said speaking to The Island.

The Cricket Committee is expected to meet the Sports Minister next week before taking charge.

Introducing a competitive First Class tournament, giving frequent exposure to ‘A’ team, under-23, under-19 team and putting up a structure for women’s cricket are said to be some of the areas the new committee is looking at.

Several former captains had declined offers to take over the national selection panel and sources said that with a  high profile Cricket Committee in place now, the trend will change.

Aravinda has been heavily involved in cricket having functioned as Chairman of Selectors and Vice-President of SLC but since 2017, he distanced himself from the sport. Sangakkara  had a brief stint as a selector but has been reluctant to get involved in cricket administration. Roshan Mahanama, who stepped down as an ICC Match Referee a few years ago has been a vocal critic of the way the sport had been governed. This is his first stint in administration since quitting as Sri Lanka ‘A’ coach 20 years ago.