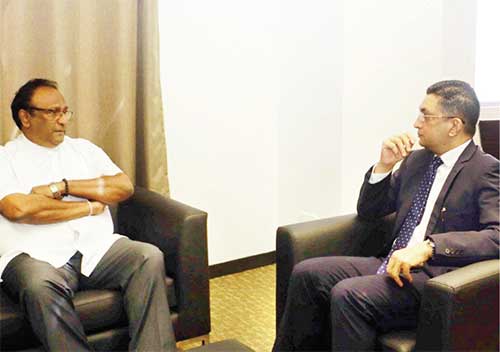 Public Security Minister, retired Rear Admiral Sarath Weerasekera, and Justice Minister Ali Sabry, PC, yesterday (18), against the backdrop of a controversial proposal to recruit a group of 150 lawyers as Chief Inspectors, and discussed ways and means of coordinating their efforts against crimes, corruption, etc.,

Sources told The Island that during the discussion the Ministers discarded the proposal for recruiting Tamil-speaking lawyers as Chief Inspectors as that didn’t find favour with many, including the Bar Association of Sri Lanka.

Sources revealed how the proposal, that originated from the police, had caused quite a controversy due to a media statement that it was an initiative by Minister Sabry.

Among the issues discussed were coordinated action against narcotics trade and extradition of those drug dealers and other wanted persons living abroad, move the High Court in respect of child abuse cases and how to utilize expert evidence in the criminal justice system et al, special investigative measures regarding heinous crimes, proper implementation of laws as well as addressing shortcomings and exercising of powers by an ASP pertaining to the anti-money laundering law.