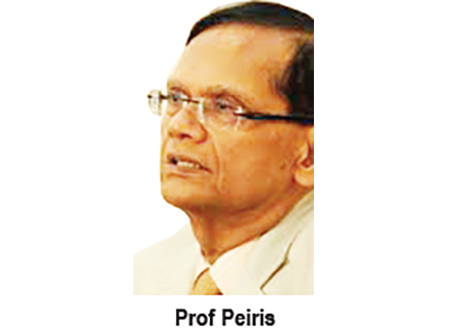 Education Minister Prof. G.L. Peiris yesterday (11) said that monuments of any kind couldn’t be built within university premises under any circumstances without approval from the relevant authorities.

Prof. Peiris emphasised that the Jaffna University couldn’t be exempted from regulations pertaining to building of monuments.

Prof. Peiris said so at the weekly media conference at the SLPP office, Battarmulla yesterday. The Education Minister dealt with primarily three issues, namely controversy over the removal of the LTTE memorial in the Jaffna University over the last weekend, the molestation of orphaned girls at a Child Welfare Centre in the Anuradhapura District and reopening of schools in areas outside the Western Province and isolated areas amidst continuing Covid-19 rampage.

The Jaffna University monument was unveiled in 2019, a decade after the LTTE was militarily defeated.

However, earlier in the day, Jaffna University Vice Chancellor Prof. S. Srisatkunarajah laid the foundation stone for what the protesting students call the Mullivaikkaal Memorial Monument previously demolished at the behest of the university administration.

Prof. Peiris said what mattered was whether the monument in question had been built with proper approval.

Chairman of the ruling SLPP Prof. Peiris alleged that some interested parties were trying to exploit the situation. He underscored the importance of promptly thwarting such plans.

Minister Peiris issued warnings over interested parties fishing in trouble waters in the wake of the SLMC throwing its weight behind the protest in the Northern and Eastern Provinces in support of Tamil campaign against the demolition of the war memorial.

Secretary of SLMC M. Nizam Kariapper in a statement issued urged the Muslims and its supporters in the north and east to join hands in solidarity with fellow Tamils and to support fully the hartal called on Monday (11)  against what he called insensitivity around memorialisation and treating the dead with dignity by the government and to condemn the  destruction of memorial monument for the dead in Jaffna  university and forced cremation Muslim janazha (infected with Covid 19 virus).

Commenting on alleged molestation of orphans at an Anuradhapura child welfare facility, Prof. Peiris assured an impartial inquiry. The media recently exposed how those working at the state-run facility took advantage of the girls sent there on court directives.

Minister Peiris said that State Minister Piyal Nishantha had visited the centre and was in the process of conducting an investigation.