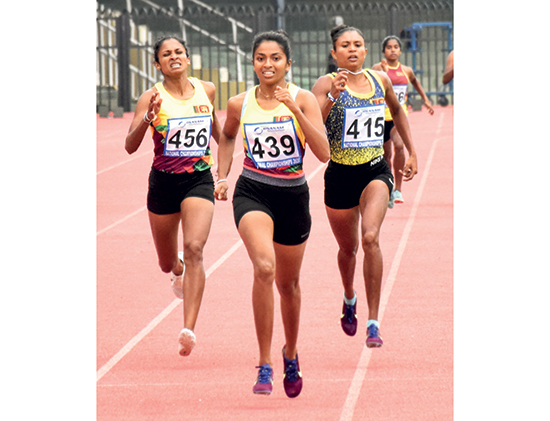 When Army’s Dilshi Kumarasinghe turned tables on senior contenders to win the women’s 800 metres title at the 98th National Athletics Championship a journalist acquainted with statistics asked in disbelief: ‘can you run a personal best smiling.’ In fact the former Ratnayake Central, Walala runner’s winning time of 2:02.80 seconds was not only her personal best but also the best time run by an Asian born athlete this year according to the statistics updated by World Athletics on Wednesday.

This piece of statistic should not be misunderstood with her Asian ranking. Her personal best has powered her from 14 in 2019 to sixth place in Asian rankings with compatriots Nimali Liyanarachchi and Gayanthika Abeyratne still occupying third and fifth ranks in Asia. Though it would take a couple of good performances to improve her Asian and World rankings further, her outstanding performance will attract the interest of many as it is the fastest time run by an Asian born athlete this year. Asia’s fastest time was run by Bahrain’s Kenyan born Nelly Jepkosgei in October.

What was remarkable in Dilshi’s victory was the ease in which she produced the notable performance. She was actually smiling, and as pointed out later by her coach Susantha Fernando she was very relaxed even during the punishing phase of the race and ‘did not use up everything in the tank.’

Last year, when she was entrusted with the task of taking the place of experienced Nimali and 400 metres champion Nadeesha Ramanayake at the South Asian Games she did it with aplomb. She won three golds and emerged as the most successful athlete from Sri Lanka. Despite training being hampered at times due to the pandemic this year, she has kept up to her promise kindling new hopes. Up until last week talk was of a two horse race to the Olympic spot in the women’s 800 metres. But now there are three which augur well for the discipline.

It is no easy task slashing seconds from her personal best and achieving the direct Olympic entry standard of 1:59.50 seconds. But with a few months remaining for the cutoff date and Sri Lanka Athletics looking forward to conduct a couple of meets ahead of the Asian Athletics Championships and the Olympics enthusiasts can keep their fingers crossed.