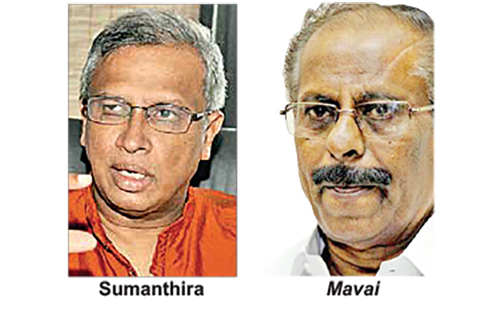 TNA MP M. A. Sumanthiran and ITAK leader Mavai Senathiraja have locked horns again over the party’s failure to retain its power in some of the local government institutions in the Northern Province.

Former MP Senathiraja on Wednesday issued a statement absolving ITAK leadership of the blame for failure to win the elections held at the Jaffna Municipal Council and the Nallur Pradeshiya Sabha on Wednesday to pick a mayor and a chairman respectively. The EPDP won in Jaffna and the TNPF in Nallur. The EPDP is led by Fisheries Minister Douglas Devananda and TNPF by MP Gajendrakumar Ponnambalam.

Senathiraja has, in his statement, said the TNA lost the elections due to a conspiracy hatched by two constituents and, therefore the ITAK, which is also a member of the TNA was not responsible for the setbacks.

Senathiraja has said it is the second time MP Sumanthiran has openly criticised the TNA policies and its party leaders, and he will personally write to Sumanthiran expressing his displeasure at the latter’s conduct.

In the closely contested election at the Jaffna MC, TNA’s Arnold Emmanuel received 20 votes and the EPDP’s Wishvalingam Manivannan 21. The election was held as the budget proposals for the year 2021 had been defeated twice.

At the election held on the same evening to pick the Chairman of the Nallur Pradeshiya Sabha, where the budget proposals for 2021 had been defeated twice, Padmanathan Mayuran, the candidate fielded from the TNPF led by MP Gajendrakumar Ponnambalam won by two votes defeating the TNA candidate. TNA candidate Koomaraswamy Mathusuthan received eight votes while Mayuran received 10 votes.