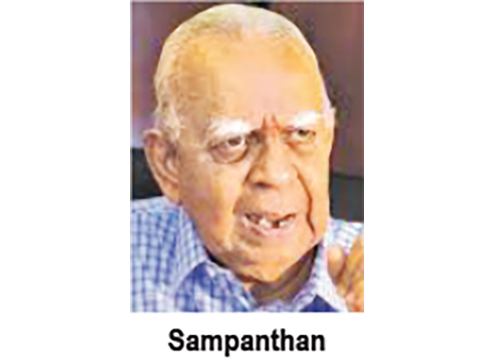 TNA leader MP R. Sampanthan has said his colaition will not be accepting a homegrown solution to what he calls the national problem. Instead, a solution should be found with the participation of the international community. That will be the main condition in the TNA’s proposal for a new constitution to be submitted to the government.

MP Sampanthan said so at the TNA’s final meeting on Monday in Colombo to decide on the content of the draft proposal to be submitted.

Representatives of the ITAK, TELO and PLOTE were present at the meeting.

The TNA’s draft proposal was a 21-page document containing certain aspects on the basis of provisions of the 13th Amendment to the Constitution, sources said.

MP Sampanthan requested his party colleagues not to publish the details of the content of their draft proposal until the government responded to them.

However, the other TNA MPs said that the draft proposals contained suggestions to formulate new laws pertaining to certain aspects such as education, law, land tenure, health, agriculture and irrigation in the

Northern and Eastern Provinces and they also prepared translations of the proposals in English and Sinhala so that it would be available in all three languages.