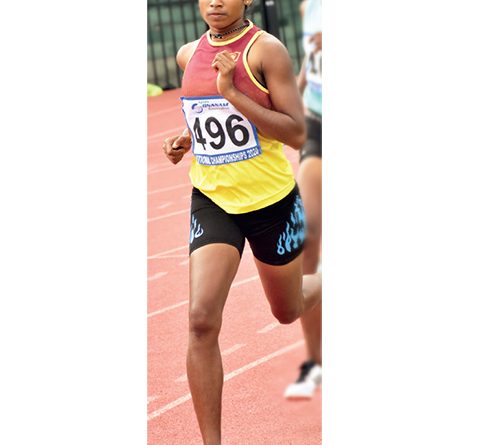 Emerging school athlete Shanika Lakshani competing alongside seniors shattered one of the oldest athletics records when she clocked 4:33.40 seconds to finish the women’s 1500 metres at the 98th National Athletics Championship concluded at the Sugathadasa Stadium on Tuesday.

The Holy Cross College, Gampaha athlete was one of the school athletes taking part in the Nationals in a bid to achieve entry standards for the postponed World Under-20 Championships in Nairobi. The athlete trained by Madura Perera came almost close to achieving entry standards in both 800 metres and 1500 metres.

Though she narrowly missed the entry mark, she could improve, by nearly two seconds, the Sri Lanka Junior Record for women’s 1500 metres, which had remained untouched for 35 years.

“She has not taken part in many 1,500 metres. She was a bit too fast in the first and the second laps. Otherwise she could have accomplished the target (earning entry standards). Looking back at the circumstances under which she had to train, this is a huge accomplishment,” said Madura Perera the coach of Lakshani in an interview with The Island.

The area she lives had been under lockdown due to the outbreak of the Covid 19 pandemic. But Madura and his team had received the support of the Gampaha District Additional Secretary to conduct a residential camp after initial training had been hampered due to the pandemic.

The more than three decades old record was held by former National Champion Dammika Menike who created the mark (4:35.70 seconds) at the Asian Intercity Junior meet in Singapore in 1985.

Lakshani who represented Sri Lanka at the Asian Youth Athletics Championship in 2019 was among several school athletes who tried their best at the National Championship which was the only national level athletics event held this year.

Meanwhile, on day two of the event, Dharmapala College, Pannipitiya hurdler Senuri Anuththara who was another World Under-20 Championship aspirant, clocked 14.60 seconds in the 100 metres hurdles to shatter the junior record held by Harshani Wijesinghe (2009).