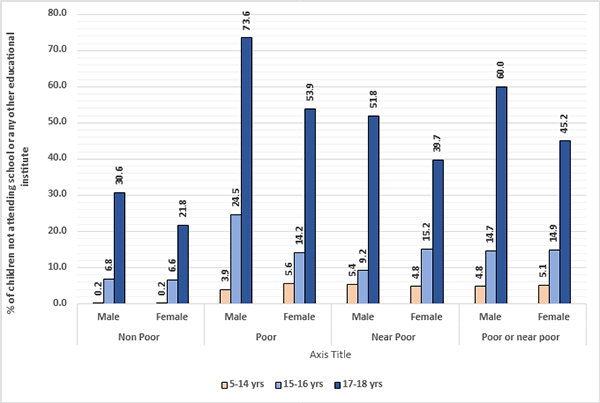 Although Sri Lanka has provided universal free education since 1939, around one-fifth of poor children drop out of school after the age of 14 years and another-two thirds after the age of 16 years. Comparison of estimates based on the Household Income and Expenditure Survey (HIES)-2012/13 and HIES-2016, conducted by the Department of Census and Statistics (DCS), show only a marginal improvement.

With the closure of schools following the COVID-19 outbreak and the sudden shift to online learning, poor children with no access to e-learning opportunities risk falling even further behind. In this context, some proposals made in budget 2021 to improve the education system and reduce poverty will benefit poor children who have been disproportionately affected by the pandemic. This blog highlights some of the education-related difficulties faced by poor children in Sri Lanka based on HIES data and the recent budget proposals which could help them to overcome these difficulties.

Poor children out of school

Out of the poor children (15-16 years) who leave the education system, more than 66% left mainly due to “poor educational progress/not willing to attend” (36.6%), “financial problems” (22.1%), or to “help in housekeeping /other activities of the household” (8.6%). The corresponding percentages of poor children (17-18 years) were 49.5, 15.8 and 20.0 respectively. One of the reasons for poor education progress could be inadequate nutritional intake. The HIES-2016 shows that the per capita energy consumption of poor households with children (5-18 years) is less than 75% [or 1513 kilo calories per capita a day (kcpcad)] of the recommended energy requirement (2030 kcpcad). The corresponding consumption of non-poor households is 2081 kcpcad, above the recommended requirement.

For example, 73.6% of poor boys aged 17-18 years are out of school compared to 53.9% of poor girls in this age group. The corresponding percentages for the 15-16 age group are 24.5 and 14.2 respectively. A similar pattern is observed for near-poor children and even non-poor children, although the proportions are significantly low for non-poor.

Inadequacy of facilities for online learning

Inequality in education can be further widened as not all children have the necessary facilities for online learning during prolonged curfews, lockdowns or when schools are kept closed indefinitely. According to the Computer Literacy Survey –2019 (DCS), only 22.2% of the households in Sri Lanka own a desktop/laptop computer (Urban: 38.3%; Rural: 19.9% and Estate: 3.8%). According to the Telecommunications Regulatory Commission (TRC) of Sri Lanka, there were a total of 1.53 million fixed internet subscribers and 5.73 million mobile subscribers in 2018. However, the use of smartphones would be limited, especially in remote rural areas, where broadband internet facilities are weak and there is no information on the extent of smartphone users among the poor.

‘E-Thaksalawa’ the national e-learning portal of the Ministry of Education (MoE), is facilitating e-learning for students (Grade 1 to Advanced Level). But some children, cannot access them at present due to the lack of facilities or means. Broadband internet facilities, a computer/laptop or a smartphone and sufficient data are essential to download available study material.

As highlighted in a previous IPS blog, the best option therefore would be to use television (TV) as 86% (HIES-2016) of households in the country own TVs (Urban: 88.9%; Rural: 86.1% and Estate: 81.2%). The ‘Guru Gedara’ distance learning programme of the MoE broadcast by Channel Eye/Nethra TV, ART TV and Ada Derana, for students from Grade 3 to GCE (A/L) are both in Sinhala and Tamil. The SLBC is also broadcasting these lessons for the benefit of children who do not have access even to a TV.

This is an excellent and innovative way for poor children to continue their studies in a stream of their choice, who may be leaving education prematurely due to lack of facilities, especially teachers, to teach science/ technology subjects, mathematics, languages, etc., in rural/estate schools and non-national schools.

Budget 2021 has some proposals which, if implemented, could solve most of the issues highlighted above. They will benefit the poor and vulnerable children, who are facing difficulties in continuing their education, explained above. The proposals are also aimed at developing the entire education system with special emphasis on skills development, to meet the ever-increasing demand for high skills and also to provide necessary facilities.

A summary of some of the most important proposals are:

• ‘E-Thaksalawa’ learning portal to be strengthened further to minimise the difficulties faced by students in rural / estate and non-national schools.

• ‘Guru Gedara’ programme to be made available to all students, by providing TV sets to schools in difficult areas.

• Improving and expanding the opportunities for vocational/technical education, which will be extremely useful in developing the necessary skills in a rapidly changing environment.

The early implementation of these proposals could pave the way to breaking the vicious poverty trap through equitable education and ensuring that no child is left behind.

Wimal Nanayakkara is a Senior Visiting Fellow at the Institute of Policy Studies of Sri Lanka (IPS) with research interests in poverty, and is a specialist in sampling. He was previously engaged at the Department of Census and Statistics, where he functioned as the Director General for 12 years. He received his BSc in Mathematics and Physics from the University of Peradeniya and holds a Postgraduate Diploma in Applied Statistics from the University of Reading, UK.