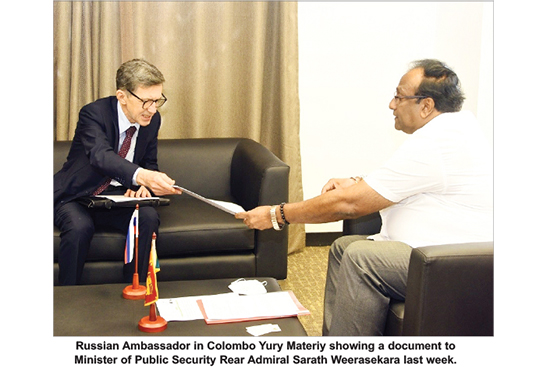 Russian Ambassador in Colombo Yury Materiy has warned that extremist Islamic terrorist organizations may channel funds to their Lankan counterparts on the pretext of extending COVID-19 aid.

The warning was issued by Ambassador Materiy when he met Minister of Public Security Rear Admiral Sarath Weerasekara at his ministry last week, the ministry sources said yesterday.

Sources said that Ambassador Materiy had told Minister Weerasekera that many extremist groups were moving funds for terror activities and had carried out such operations via the trade and trafficking of narcotics under the cover of humanitarian assistance for Muslim organisations and charities.

In response the Minister said that after the war a new strategy had been formulated by the then Sri Lankan government to increase the intelligence battalions from 3-7 and deported nearly 160 madrasa scholar leaders who under the guise of religious studies were spreading hate and extremist propaganda.

Unfortunately, the yahapalana government had dismantled the intelligence network. The new government had taken action to remedy the situation, he added.

The Ambassador lso inquired into the progress in investigations on Easter Sunday bomb attacks of 2019, and Minister Weerasekara responded stating that 267 suspects had been remanded after the 8 blasts and currently all criminal investigations had been completed and handed over to the Attorney general’s Department for further action.

The Russian Home Ministry continued to work closely with the Ministry of Public Security, the Ambassador said, adding that Russia was now a member of the United Nations Human Rights Council. Minister Weerasekara congratulated both President Vladimir Putin the President and the ambassador on Ruassia’s appointment.

In relation to the resolutions to be passed on Sri Lanka Minister Weerasekera reminded the Ambassador how the previous Secretary General of the United Nations violated the United Nations Charter by making unsubstantiated comments in regards to the Sri Lankan humanitarian operation at the closing stages of the Civil war. The Minister reminded the Ambassador that part of the resolution of 30/1 stated that a deliberate attempt had been taken by the Sri Lankan government to prevent much needed food and essential supplies from reaching the war affected.

The Minister went on to clearly and evidentially dismiss that claim.