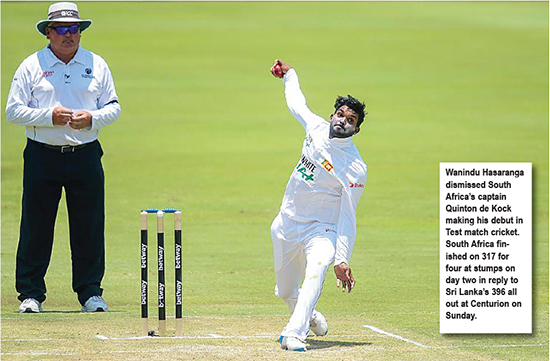 Sri Lanka have been severely handicapped in the opening Test match against South Africa as a couple of injuries reduced them to virtually nine men here at the Centurion yesterday. They came into the second day’s play after being informed that Dhananjaya de Silva has been ruled out of the series with a thigh strain and then Kasun Rajitha pulled off with a groin injury having bowed just two overs.

Dhananjaya’s solid batting had laid the foundation for Sri Lanka’s highest total in South African soil ever and the team will miss his off-spin as well which came in really handy when they won a series last time in  South Africa.

Sri Lanka’s first innings score of  396 all out is a commendable effort as they added 56 more  to the overnight score. Their previous best was 342 all out at Newlands in 2012.

There were debates about whether Dasun Shanaka deserved a place in the Test side but he has done really well. His Test match temperament was on display as he posted an unbeaten 66. Known as bit of a dasher, Shanaka was left with little choice than to go for his shots as he raced to 66 off 87 balls with three fours and five sixes.

Then with injury to Rajitha, he had to share the extra burden of bowling more overs and took a return catch to dismiss Dean  Elgar for 95.

Elgar had added 141 for the opening wicket with Aiden Markram (68). Sri Lanka picked up four wickets for 79 runs to reduce South Africa to 220 for four. But an unbroken 99 run stand for the fifth wicket between Francois du Plessis (55) and Temba Bavuma (41) helped the Proteas to take control of the game.