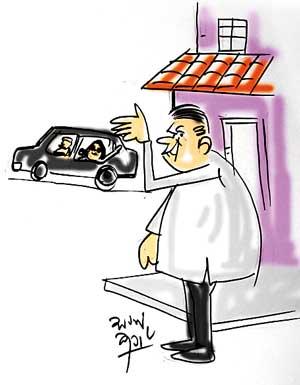 The official vehicle of a head of the administrative body of a city north of the upcountry capital is being used to transport his wife, a teacher, to her school located 40 kilometers away.

The same vehicle is being used to bring her back after school in the afternoon. The fuel for the vehicle is also being supplied at public expense, they say.

The husband of this female teacher is said to be functioning only in an acting capacity as the head of the city administration.

By the way, the duly elected head of the city administration was removed by a higher authority recently following an inquiry into corruption charges levelled against him.

People in the area use the pithy Sinhala proverb, kehi gaani deela, hotu gaani gaththa wage (like choosing a woman with a runny nose rather than a coughing woman) to describe the current situation, they say.