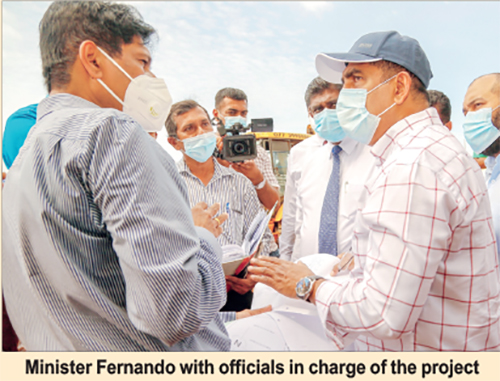 Highways Minister Johnston Fernando yesterday said that the one-kilometre extension of the Marine Drive from the Colpetty Railway Station to the Hotel Ranmuthu would be resumed on Jan 1 and completed within 60 days.

There is a 300m stretch of the road to be completed, near the US Embassy, and work thereon would commence on 01 Jan. 2021, the Minister said.

Speaking to the media after an inspection tour to the site, Minister Fernando said that when the work was completed the Marine Drive would have a tunnel and an overhead bridge connecting the railway station.

“President Gotabaya Rajapaksa wants this work completed expeditiously to reduce traffic congestion on the Galle Road. The work was suspended due to security concerns with regard to the stretch of the road across the premises of the US Embassy. I met Embassy officials and the matter was sorted out. The work will resume on Jan 01.

The construction work will go on round the clock seven days a week, the Minister said, adding that the Marine Drive would be extended up to Panadura. The project has been designed to expand the existing Marine Drive through an underground tunnel through the Galle Face Green which will then be connected to an elevated highway on the Port City, linking up to the New Kelani Bridge.