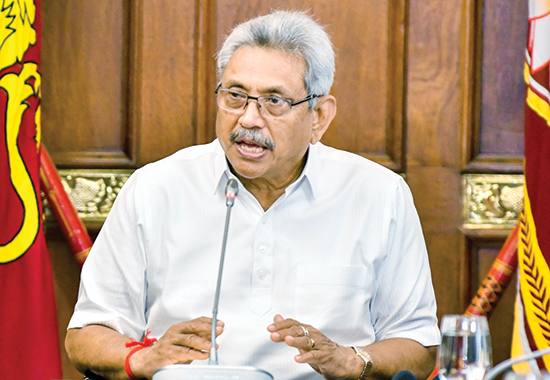 President Gotabaya Rajapaksa, yesterday (10) faulted the Government Analyst’s Department, the Attorney General’s Department and the Police over the simmering crisis in the ‘prisons system.’

The President’s Office quoted President Gotabaya Rajapaksa as having said at a meeting summoned to discuss shortcomings and problems in the ‘prisons system’ that due to inordinate delay on the part of the Government Analyst, the AG and the police, a large number of suspects were held in prisons pending investigations.

The President said so when a special five-member committee headed by former High Court Judge Kusala Sarojini Weerawardena handing over an interim report on the Mahara prison riot to Justice Minister Ali Sabry. A top level CID investigation too is underway into to the prison riot.

President Rajapaksa suggested that in addition to the departments mentioned, the Prisons, the Customs and Rehabilitation, etc., should constitute a Presidential Task Force to address the issues at hand.

Justice Minister Ali Sabry, PC and Prisons Management and Prisons Rehabilitation Minister Lohan Ratwatte were among those present at the meeting.

President Rajapaksa directed relevant authorities to explore the possibility of setting up pre-fabricated buildings at locations already chosen for prisons while underscoring the urgent need for a rehabilitation project for over 12,000 prison inmates addicted to narcotics. President Rajapaksa also suggested that foreign prisons, too, should be studied as part of the overall efforts to improve conditions in the country’s jails.

All the inmates killed in Mahara prison riots were remandees.

Police spokesman DIG Ajith Rohana said that they had been in remand for narcotics related offences. They were residents of Minuwangoda, Biyagama, Ja-ela, Weliweriya, Wattala-Hunupitiya, Ederamulla, Anguruwathota, Kelaniya and Sapugaskanda. The police spokesperson said that families of the dead inmates had identified the bodies.

DIG Rohana said that on a court directive the autopsies of the 11 dead would be conducted by a five-member team consisting of four consultant judicial medical officers and one ballistic expert from the Government Analyst’s Department.

Earlier in the day, DIG Rohana said that the CID inquiring into Mahara incidents had so far recorded 228 statements from Prisons officers (70), doctors (11) nurses (17) and the rest inmates.

The Mahara prison had approximately 2,800 including 600 convicts at the time of the riot.

DIG Rohana previously told a joint press briefing called by the police and the Excise Department that 72,000 persons had been arrested since 2019 November over narcotics offences.