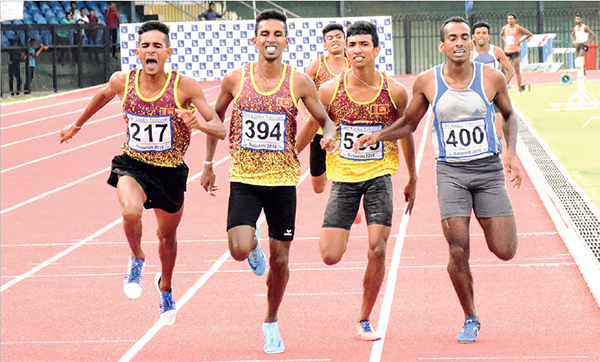 The current pandemic situation has forced Sri Lanka Athletics to take an unprecedented step in including two track athletes, who are currently serving drug bans, in the list of eligible athletes to compete at the forthcoming National Athletics Championships.

Names of sprinter M.G.C.M. Jayasekara and 800 metres specialist S.K. Wedagedara, who were banned for failed drug tests appear in the list of eligible athletes published by Sri Lanka Athletics.

“The two athletes had been included in the list pending an Appeals Committee decision,” a senior official of Sri Lanka Athletics said in reply to The Island queries.

“The pandemic situation has forced us to limit participation. Only the top ranked athletes are allowed to compete. We have already published the top list to avoid confusion and only those who are in that list wiil be allowed to enter the Stadium. In the event the Appeals Committee take a decision within these few days to allow the two banned athletes to compete, they would not be able to enter the stadium if we do not include them in the list now. They are included, pending the Appeals Committee decision,” said the official.

When contacted in this regard the Sri Lanka Anti Doping Agency sources confirmed that M.G.C.M. Jayasekara and S.K. Wedagedara have both appealed their bans.

The senior official also said that the athletes whose names are not listed in the eligible list to compete at the 98th National Athletics Championship can appeal for their inclusion before December 8 as the sport’s governing body struggles amidst the pandemic to provide top athletes with the final opportunity to earn ranking points for this year.

“There is no need to panic if your name is not there. What you need to do is to make an appeal. Then we will consider including them,” said the official.

The eligible list includes the highest ranked athletes who are currently in Sri Lanka.

“All top athletes excluding those who are based overseas are included in the eligible list. There are a few athletes who had gone out of our radar during the last few months. They can appeal if they consider themselves fit to compete,” said the official.

The championship will commence on December 26 with only athletes, coaches and masseurs allowed inside the Sugathadasa Stadium.

If held as scheduled the 98th National Championship will be the first track and field event at which local athletes are taking part after the South Asian Games in Nepal in December 2019.