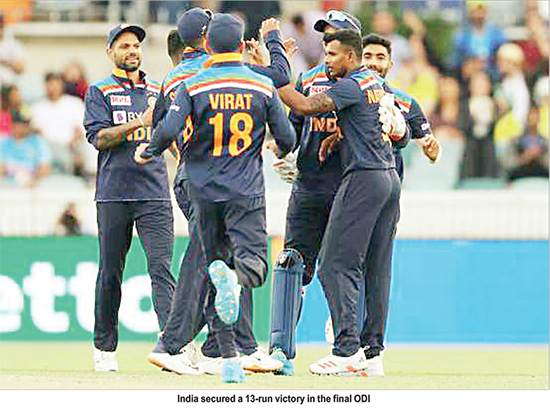 Virat Kohli spoke of the “need to improve body language in the field and the bowling” going into the final One-Day International in the three-match series. India had already conceded the series 0-2 to Australia having lost the opening two ODIs. However, the Indian side heeded to their captain’s call as India fought back to finish with an eventual result of 1-2 in the one-dayers with a 13-run win on Wednesday, bowling Australia out for 289.

Chasing 303 for a whitewash at the Manuka Oval in Canberra, extra bounce from Jasprit Bumrah had stand-in opener Marnus Labuschagne on tenterhooks against the new ball as Australia struggled in the first few overs. Debutant T Natarajan put an end to Labuschagne’s edgy stay forcing an inside edge onto the stumps for his maiden ODI scalp. It was the first time in six games that India had picked a wicket in the powerplay.

Finch, meanwhile, was living a charmed life. He took his time to settle in and the game could’ve panned out differently had Shikhar Dhawan held on to a chance at slip that he spilled early on in Finch’s innings. Hardik Pandya missed a run-out chance and Bumrah missed a return catch as Finch made the most with another half-century adding to his scores of 114 and 60 in the series. He attacked in spurts, kept the scoreboard ticking and in turn, Australia in the game. In the absence of Warner, who was ruled out with a groin injury, much of the onus was on him to give Australia the start they’ve been getting in the series. With Labuschagne and Steve Smith falling cheaply, with Shardul Thakur impressive early on, Finch shook off the tentative start and soaked in the pressure to compile a well-made 75 before finally being sent back after Jadeja plucked out a sharp catch in the deep.

Debutant Cameron Green got himself a start but couldn’t capitalise on it, as was the case with Moises Henriques who was promoted to No. 4. The pair got themselves into the 20s before leaving too much for the lower-middle order. Alex Carey and Glenn Maxwell resisted the Indian attack getting the big shots in even, but a suicidal run-out broke the vital stand that added 52 with Carey departing for 38 as India sighted victory with Australia needing 92.

Maxwell brought that equation down to 36 from 34 with a brilliant half-century, his second this series, but India heaved a sigh of relief when Bumrah knocked him over for a 38-ball 59. Maxwell’s stand with Ashton Agar for the seventh wicket was instrumental in keeping them in the game, but if Australia were to pull this win out of the bag, they needed Maxwell. In the end, although Australia bat deep, they fell short.

Bumrah came into his own, getting the yorkers in, varying his pace and keeping the batsmen on their toes. He was the most economical of the lot, returning 2 for 43 while Thakur was impressive with 3-51 with spells of knuckleballs and slower ones that foxed the batsmen.

Earlier, after finally winning a toss this series, Kohli led the way with a masterclass while wickets fell around him. He played sheet anchor to perfection with textbook ODI batting. But it wasn’t until he fell that the game turned on its head with Pandya’s enterprising 92* and Ravindra Jadeja’s dynamic 66*. The pair amidst India’s highest sixth-wicket stand of 150 against Australia gave India a fighting total after a stumble in the middle overs. The pair accelerated in the final five to get as many as 76 with shots across both sides of the wicket, piercing the gaps at will as they helped India finish with 302.

It was their strong finish that handed India the momentum going into the break after Australia had done well to contain them to 192 for 5 after 40 overs. On a belter of a wicket at the Manuka Oval, Australia’s bowlers were right on the money early on despite missing their mainstays in Starc and Cummins. Sean Abbott and Agar got among the wickets to hand Australia the early advantage.

Abbott carried forward his form from the domestic season with a wicket in his first over. He bowled in good areas and got Dhawan advancing early on to end up chipping straight to cover. Kohli and Shubman Gill revived India’s innings with a solid 56-run stand as the youngster flicked, drove and used his wrists well. Once the spinners began operating, they tied him down a tad before he fell leg before to Agar, trying to sweep him, unable to convert his start.

During his knock, Kohli became the fastest batsman in ODIs to get to 12000 runs. Shreyas Iyer’s penchant against spin came to the fore as he got a start, but squandered it after slashing straight to backward point. India lost a wicket just when it seemed like they were building a partnership. KL Rahul fell soon after rewarding Agar for some tight bowling, sticking to his lines, bowling wicket to wicket and the premeditated sweep from the batsman had him trapped leg before – a dismissal eerily similar to that of Gill.

Pace and bounce with slight turn for Zampa and Agar helped tighten the noose in the middle overs, making the Indian batsmen work hard for their runs and forcing them to make mistakes. Kohli, however, was unperturbed, lunging forward to tackle them. It took Hazlewood, who continued to have the wood over Kohli this series, to send him back for 63 for the third time in three games after a stroke of brilliance from Finch. There was no appeal from the bowler, and a half-hearted one from Carey, but Finch reviewed it; although HotSpot showed nothing, there was a spike on snicko.

Hardik and Jadeja thereafter staged a counterattack that Australia didn’t have an answer for. They were the last recognised batting pair for India and they made the most of the opportunity to make it count. They found the gaps, kept the scoreboard ticking, cleared the fence, and put the poor balls away. Abbott, who made a good start, took a pasting in the latter half, conceding 84 in his 10 overs, leaving the question if Finch had underused Henriques and overbowled the former.