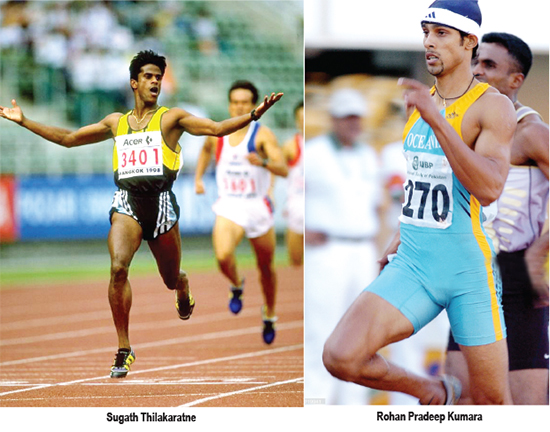 It was a time when Sri Lanka had in possession some of Asia’s best sprinters. Sri Lanka was so strong in the men’s 400 metres from mid 90s to early 2000s, when the IAAF conducted its World Athletics Continental Cup in 2002, the Asian continental team fielded two Sri Lankan sprinters in the 4×400 metres relay team. It was at this meet in Madrid that the Asian Games medallists Sugath Thilakaratne and Rohan Pradeep Kumara achieved their best feat (according to placing) at a world event, a fourth place finish which was later upgraded to bronze. While Sugath and Rohan competed in the relay, Susanthika Jayasinghe competed in women’s 100 metres to win the bronze which was upgraded to silver years later. However, 18 years after the achievement and many years after their fourth place was upgraded to bronze, Sugath and Rohan are yet to receive the medal and the cash reward that accompany it.

“To be placed fourth in the relay was a huge achievement. During the previous edition (in Johannesburg in 1998) I was placed sixth in the individual event. I was disappointed that time because I could not get accustomed to the weather there. As I remember, in Madrid the race had to be rescheduled due to rain. We were able to finish fourth. Later it was upgraded to bronze. However I did not know that our fourth place had been upgraded to bronze until 2014 or 2015,” recalled Thilakaratne in an interview with The Island.

It was Sri Lanka Athletics’ respected statistician Saman Kumara Gunawardena who informed Thilakaratne of his highest achievement at World Stage to the amusement of the Sri Lankan record holder. However, Thilakaratne and Rohan are yet to receive the medal years after the USA team were stripped off the gold medal and the other medals were upgraded to gold and silver and fourth place to bronze.

“Some huge prize money was offered for winners at these championships. For relays they offered close to US $ 100,000 for the gold, 60,000 for the silver and 40,000 for the bronze. We received neither the medal nor the prize money. It was many years after the event that we came to know. The Sri Lankan public deserved to know our achievement. But that did not happen,” said Thilakaratne.

Why USA were disqualified

The World Athletics’ (formerly IAAF) quadrennial event featured Americas, Africa, Asia, USA, Great Britain, Oceania, Germany and Europe. USA were inclusive of James Carter, Leonard Byrd, Godfrey Herring and Antonio Pettigrew. Of them Byrd and Pettigrew were part of the US team that won the 4×400 metres relay gold medal at the 2001 World Championships and Pettigrew was part of the US team that won the 2000 Sydney Olympic 4×400 metres gold. USA clocked 2:59.21 in winning the gold medal and the lucrative cash award. Americas team largely inclusive of athletes from the Carrabin islands (Félix Sánchez, Alleyne Francique, Michael Mcdonald, Michael Blackwood ) returned a time of 2:59.19 to be placed second. Africa clinched the bronze returning a time of 3:01.69 seconds while Asia finished just outside medals. The result of this event and several World and Olympic sprint events were changed many years later after Pettigrew admitted to using Erythropoietin, commonly known as EPO. Giving evidence in a 2008 trial involving his coach Trevor Graham, Pettigrew admitted using the performance enhancing drug between 1997 and 2003. World Athletics and the International Olympic Committee stripped off the gold medals won by US teams involving Pettigrew.

“When I look back at what has happened we can be happy that we competed as clean athletes though we could not win a medal that day. Sanity has prevailed. They have rectified the records. But the World Athletics and the Asian Athletics Association can send a message even now to present day athletes by retrieving the medals and awarding them to the teams who were placed behind the USA team,” said Thilakaratne who did not make that request on his behalf during his tenure as the president of Sri Lanka Athletics.

A senior official of Sri Lanka Athletics said that awarding of medals were the responsibility of the Asian Athletics Association as the three athletes had represented Asia at the World Cup.