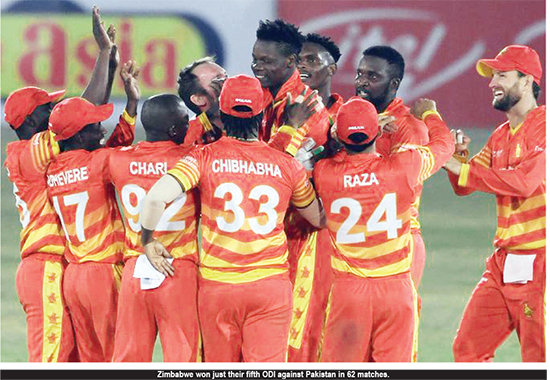 Zimbabwe picked up their first ICC Men’s Cricket World Cup Super League points after a remarkable game of cricket in the third and final ODI with Pakistan in Rawalpindi.

After both sides tied with 278 after 50 overs, Pakistan were restricted to just two runs as Blessing Muzarabani took two wickets in the Super Over, and Zimbabwe were able to knock off the three runs needed for the win.

Zimbabwe got off to a disappointing start to the game, as Mohammad Hasnain removed Brian Chari, Chamu Chibhabha and Craig Ervine to leave the Chevrons reeling on 22/3.

But Brendan Taylor and Sean Williams set about repairing the damage, putting on 84 for the fourth wicket before the latter perished to Hasnain for 56.

Wesley Madhevere (33) supported Williams but when Hasnain removed the youngster, Zimbabwe were 181/5 – with the Pakistan paceman having taken all five wickets, finishing on 5/26 from his ten overs.

But Zimbabwe continued to fight and Williams battled his way to 118* with the company of Sikandar Raza, who blasted 45 to help rocket his side up to 278/6 from their 50 overs.

Pakistan’s reply got off to a torrid start as Imam-ul-Haq and Fakhar Zaman were sent back to the pavilion after just eight balls of the innings, and when Haider Ali was trapped by Richard Ngarava, Pakistan were in all sorts of trouble at 20/3.

Donald Tiripano entered the attack and bowled both Mohammad Rizwan and Iftikhar Ahmed as Pakistan looked almost dead and buried at 88/5, until a 63-run stand between skipper Babar Azam and Khushdil Shah (33) gave them a fighting chance.

A tremendous 100-run partnership between Azam and Wahab Riaz swung the pendulum in the hosts’ favour heading into the final four overs – but Blessing Muzarabani had other ideas.

The Zimbabwe paceman returned figures of 5/49 in his ten overs, removing the dangerous Wahab, Shaheen Afridi and finally Babar, for 125, to give his side the edge once again.

With 13 required off the final over from Ngarava and just one Pakistan wicket remaining, Muhammad Musa struck two boundaries, including one off the final ball of the innings, to force the first Super Over of the ICC Men’s Cricket World Cup Super League.

The impressive Muzarabani stepped up to remove Ahmed with the first ball and almost had Shah next ball, as the mistimed shot landed in no-mans land.

But Muzarabani got his man just two balls later, as Shah chopped on, meaning Zimbabwe needed just three to win.

Up stepped Taylor and Raza to knock off the runs with three balls to spare, as Zimbabwe tasted their first ODI win in Pakistan since November 199